The best way to attract research money is to give readers interesting and useful information that speaks to their specific interests and supports their causes. Blogging for research money is a great way to showcase your current projects while reaching your audience in an informative way. The 468-word sample post below is just one example of a creative, news-related blog entry that is sure to arouse curiosity in your research and the work you are doing.

World’s Most Advanced Scuba Gear Opens The Depths For Scientists 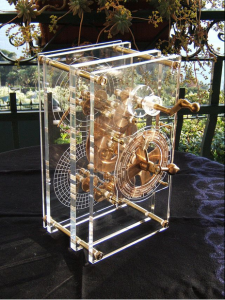 Artifacts like the Antikythera Mechanism are being discovered and researched by scientists and archaeologists using the Exosuit.

The future of underwater exploration is upon us. A whole new world has opened up for scientists who explore extreme underwater depths in search of ancient artifacts. New high-tech scuba gear is making it possible for divers to explore underwater for longer amounts of time than ever before, searching for more pieces of the Antikythera mechanism, one of the world’s oldest computers.

The Exosuit cost $1.5 million to develop and was originally designed for working in New York City’s water treatment plants. According to New Scientist, marine archaeologists are retrofitting this advanced diving gear to explore deep dive sites like the Greek island of Antikythera in the Aegean Sea. Scientists are putting the suit through its first trials, readying it for prolonged, deep dives in search of more artifacts from this area.

Divers are normally limited by both the depth they can dive and amount of time they can stay submerged. However, this “wearable submarine” will take explorers down nearly 1,000 feet for up to 50 hours. Because the dive environment is like that of a submarine, time spent below is only limited by the diver’s comfort.

The Exosuit, although submarine-like in its depth capabilities, is not limited just to observing the ocean floor. Built with a rigid aluminium alloy outer skin, the humanoid form has articulating arms and legs. Additionally, this extreme scuba diving gear has claw-like manipulators on the end of each arm, allowing divers to pick up relics with extreme delicacy.

This scuba gear isn’t limited to picking up objects. With foot pedals, the diver controls thrusters on either side of the suit to quickly move around, as well as to stabilize herself. Technicians topside, using an attached umbilical cord, can also take full control of the Exosuit to aid divers, or to bring the suit back to the surface in an emergency.

The Exosuit can not only retrieve artifacts from dive sites, it can also collect other data. Armed with piercing LED lights and High-Definition video cameras, scientists can analyze the action in real time and record it for later analysis. Collecting data in this way will enable marine scientists and archaeologists to plan for future dives in search of more evidence.

The Future Is Here

Although diving for ancient relics such as the Antikythera mechanism is out of reach for most scientists, plenty of antiquities are still awaiting discovery. Your role in future underwater exploration is important.

With the creative voices of our professional writers, BlogMutt can help scientists and researchers hold an interested party’s attention. Let us help you capture your audience with timely, interesting, and engaging information. Contact us today to find out how you can continue to expand your reach for funding while maintaining a strong and informative online presence.