Weekly WOOF Compendium: Even In The 1800s, “Sleepy Hollow” Was Cool

What are your weekend plans? You probably have some real jams in the works. A little light reading of the political philosophy of Samuel von Pufendorf, or Roman law, perhaps? Or maybe you are deciphering that Aesopian code you found written in an old book. 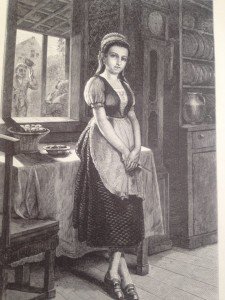 Even if you’ll just be flipping through the channels, languidly awaiting the return of the new season of the TV series “Sleepy Hollow,” don’t worry. Even in the 1800s, artists were excited by depictions of the characters from Washington Irving’s short story, “The Legend of Sleepy Hollow.” Check out the portrait to the left, how you can see Ichabod Crane through the window. One commentary on this portrait points out that while Katrina is turned away from Ichabod, she still seems almost to sense him. What do you think? Is there any other symbolism in the portrait?

Without further ado, here is your weekly WOOF compendium of the WOrds of the day from the dictionary OF the day, which will prepare you for just about any of your weekend adventures.

Wednesday: Fufian Caninian Law (Lex Fufia Caninia) — Roman law enacted in 2 BC by Augustus, restricting the manumission of too many slaves at once. A master who had three slaves could free only two; one who had between four to ten could free only half of them; one with eleven to thirty could free only a third, and so on. No more than 100 slaves could be liberated by any one master. (1991 Dictionary of Historic Documents)

Thursday: Aesopian Language — Code language. Deceptive terminology and hints used to get around the censors of the Czar. (1964 Dictionary of Communist English)

Friday: Katrina Van Tassel — Ichabod Crane’s love interest in Washington Irving’s 1820 short story, “The Legend of Sleepy Hollow.” In her portrait by Benjamin Reinhart (1829 — 1885), she looks as Irving describes her, “as a blooming lass of fresh eighteen, plump as a partridge, ripe and melting and rosy-cheeked as one of her father’s peaches, and universally famed not merely for her beauty, but her vast expectations…and withal a provokingly short petticoat to display the prettiest foot and ankle in the country round.” (1879 American Painters)