Boulder Bibs is located in a nondescript warehouse district on the far outskirts of Boulder, Colorado. It’s not the place you could find without looking really hard – in fact, when we went to meet them we had to ring our contact, Ben, just to find the parking lot. Needless to say…they’re not exactly getting foot traffic wandering through their door and turning into customers. 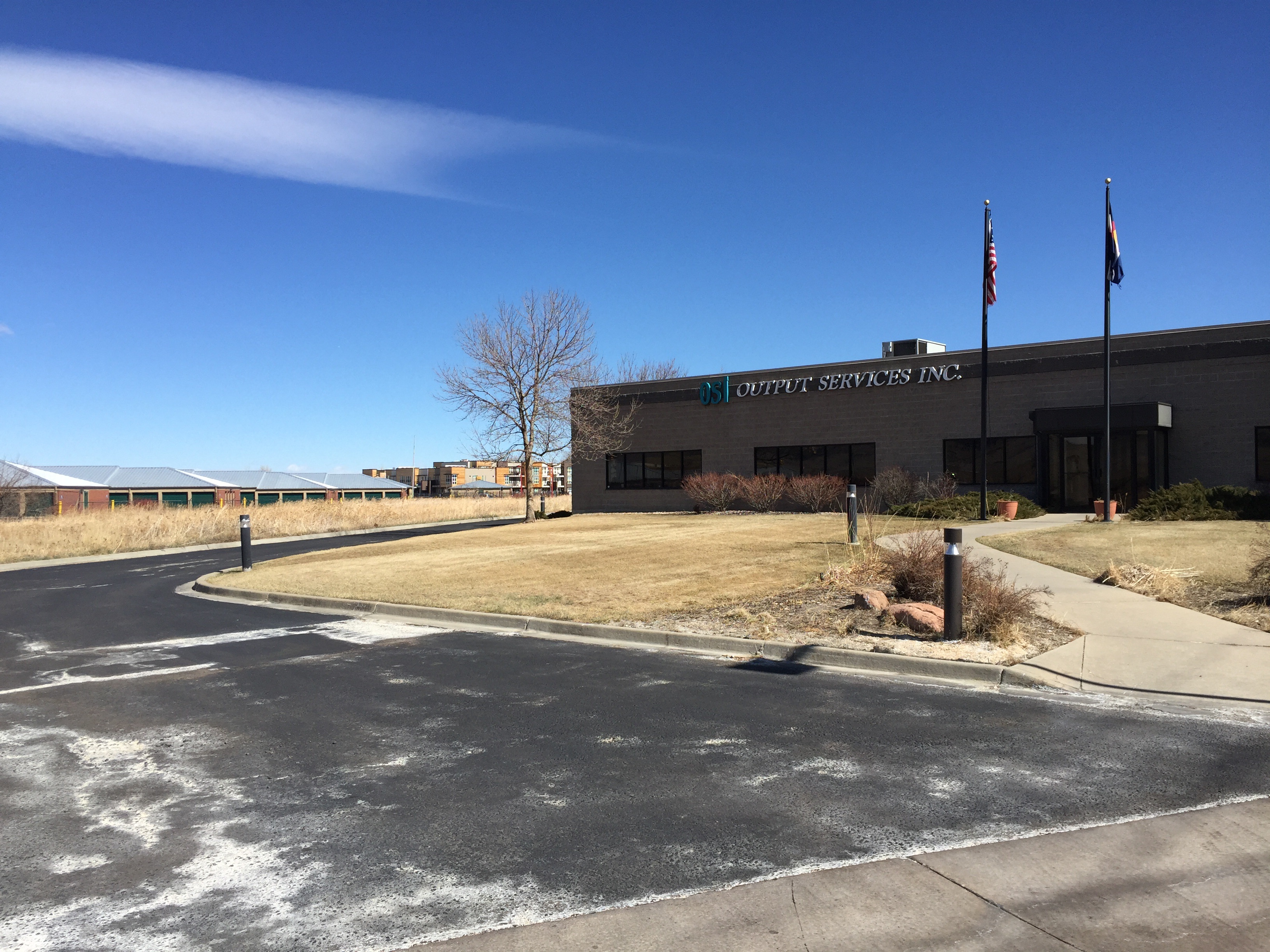 As a result, Boulder Bibs has to rely entirely on digital marketing and referrals to propel their business. Armed with Verblio (formerly BlogMutt) and a few other tricks up their sleeve, they’ve been able to do it. In spades.

Boulder Bibs became a Verblio customer in October of 2016.

Just two months later of consistent blog-posting, they were ranking on page one of Google for four of their critical keywords. In Boulder Bibs’ new client signup process is a question that asks, “how did you find us?” and one of the most common responses of late is “search engine”.

But the proof is in the pudding. Check out this chart showing the number of new customers coming from online marketing since Boulder Bibs started blogging:

This is the story of what happened during those two short months to make these things happen.

Some Background on Boulder Bibs

The company Boulder Bibs happened almost by accident. Output Services, a print shop focused on B2B printing services for banks, government entities, and other high-volume, black-and-white printing customers, got a call one day from the organizer of the Bolder Boulder (already a current customer of Output Services at this time), asking if they could print the race bibs (the race numbers runners pin to their shirts to track times) in addition to the marketing materials Output Services were already whipping up for the race.

While it wasn’t part of their current business, they decided to say, “Sure!”

Just like that, Output Services was in the race bib business and didn’t look back. The company eventually created the subdivision called Boulder Bibs, and now is printing race bibs all the way from the local-favorite Bolder Boulder 10K to global Ironman triathlon races. 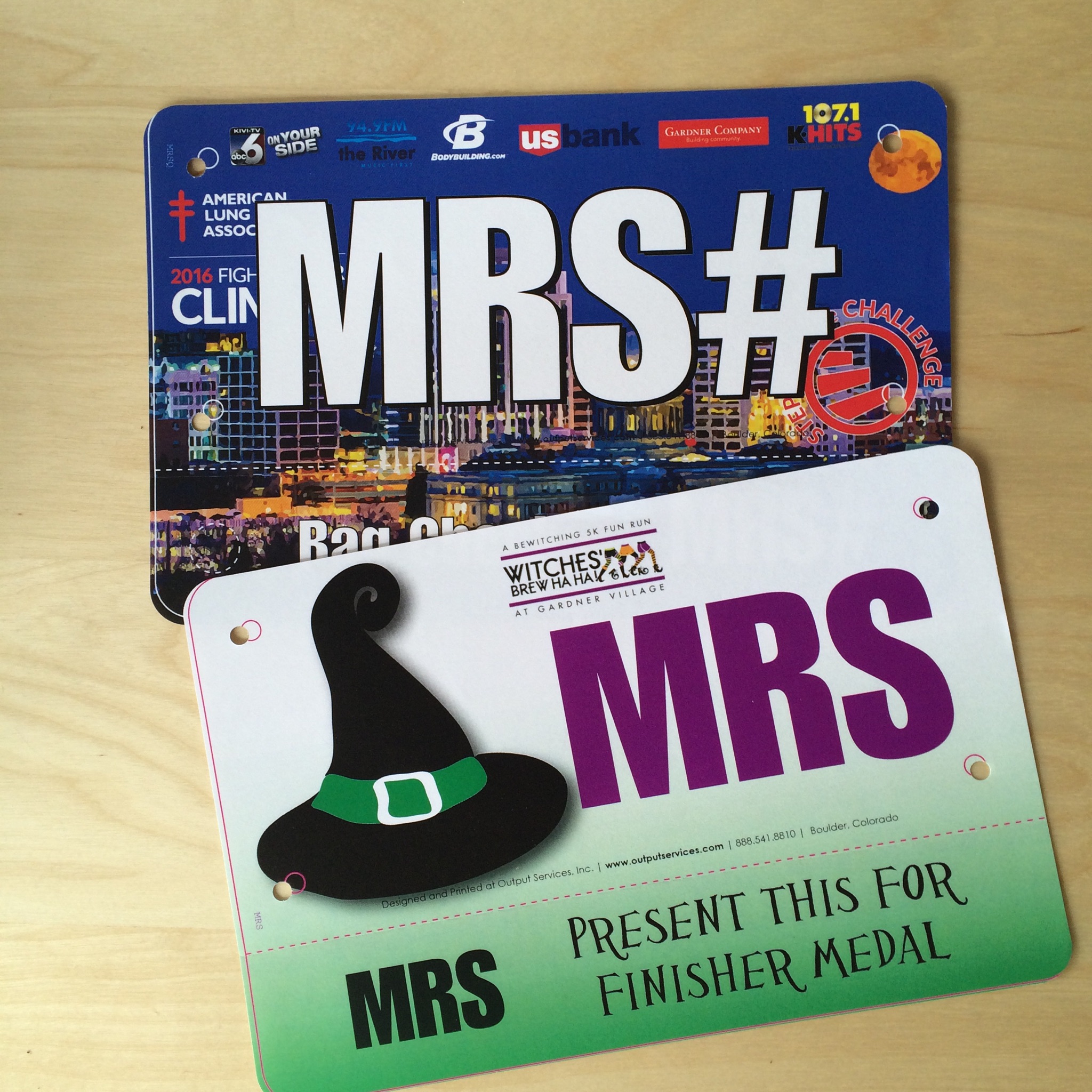 The Genesis of Blogging at Boulder Bibs

When we met with Ben Armengolli, Boulder Bibs’ business development associate at Boulder Bibs’ HQ, he told us how he’d been hired on as a graphic designer and had quickly begun doing double-duty as the company’s SEO manager. Before Verblio/blogging came into the picture, he’d spend two hours or more each week making tiny tweaks to try and optimize the company’s website for SEO traffic – changing copy, title and meta description tags, etc. But to his chagrin, these optimization efforts weren’t yielding a whole lot of results.

What Ben and team realized then was they needed MORE content on their website, not just experimenting with the already-existing web copy, to more definitively move the needle of awareness on search engines.

The company dutifully started blogging themselves, but quickly realized that writing posts was a huge time suck and wasn’t in their sweet spot across the team or as an organization. To save time and allow them to focus on their strengths, they decided on outsourcing their blog posts and discovered Verblio through a friend.

At the beginning, Boulder Bibs had Verblio writers focus on general running topics and keywords (best running shoes for trail running or how to run a 5K, for example), but fairly quickly realized that while these topics were driving traffic to the site, the traffic wasn’t qualified. They were attracting runners but not their actual target buyer—race directors—as they realized later on in the game.

Boulder Bibs already had a couple of local Girls on the Run chapters as clients, but they were looking to deepen their relationship with the organization. (It was awesome for us to find out that Girls on the Run is a nonprofit that helps girls develop self-confidence, friendships, and a healthy lifestyle through running.)

But the key here is what Boulder Bibs chose to do after publishing the post. They used a really smart social media strategy—they tweeted a link to the blog post on their Twitter account and tagged Girls on the Run. A social media manager from Girls on the Run saw the tweet and retweeted it. Since Girls on the Run has a very large Twitter following (over 25,000), the retweet tapped into that network and was seen by a LOT of people, and resulted in a huge spike in traffic to Boulder Bibs’ blog. 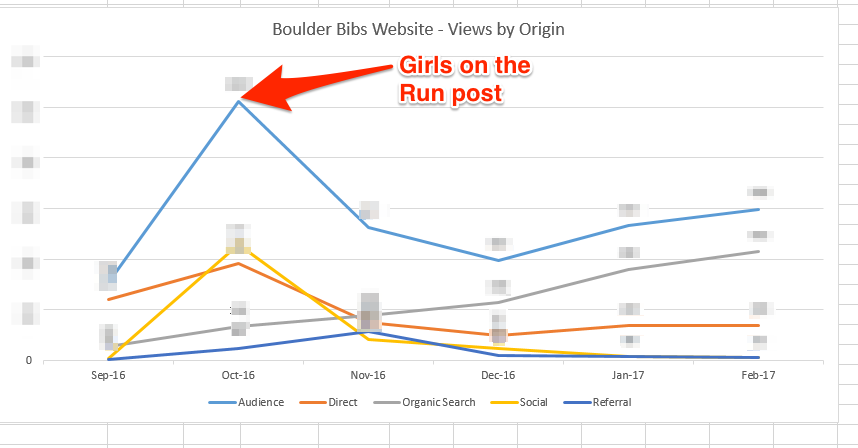 While the traffic numbers in and of themselves were great, the real value for Boulder Bibs was a select few people that came as part of that traffic—namely, organizers of other Girls on the Run chapters around the country. And that was Boulder Bibs’ aim. Now some of those organizers who initially came through that blog post are clients. 🙂

Boulder Bibs’ ideal buyer is a race director (someone who manages all of the logistics of a race, which could be anything from a local 5K charity run to a massive Ironman triathlon). But the traffic the blog was generating was much more broad with an unrefined keyword strategy—that is, runners in general. So Ben and the team realized they needed to better define their keyword strategy to specifically attract and speak to these prospects and their challenges.

So they thought like inbound marketers. They put themselves in the shoes of these race organizers and asked questions like, “What questions do race directors have when planning a race?”, “What challenges are they trying to solve?”

The answers to these questions led the team to a new set of keywords and topics including both those directly related to running and more bib-specific: “Making Your Bib a Participant Keepsake” and “3 Advantages of Tyvek Race Bibs” but also non-race-bib topics of interest to race directors such as “7 Tips for Organizing a Great 10K”.

After receiving these posts from Verblio, Ben set them live on the Boulder Bibs blog—a process that took only about 5 minutes per week, according to Ben. 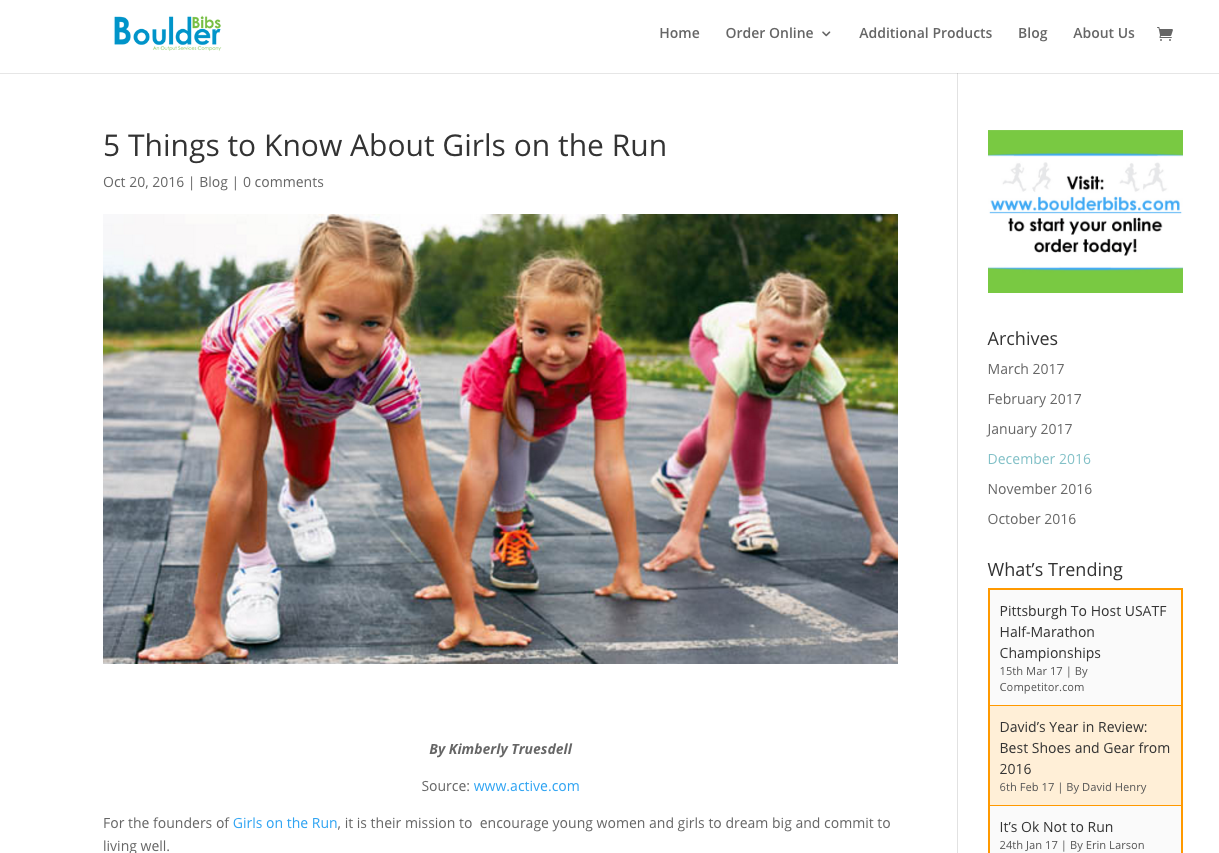 After that, the team watched anxiously. Ben describes his process of checking Google rankings frequently, feverishly, and seeing the posts start to appear and then go from page 10 of Google to page 5, then 3. Finally, when the blog posts hit page one of Google, the team made a point to go out and celebrate!

Boulder Bibs now has blog posts ranking on the first page of Google for 4 critical keywords around the topic of race bibs. 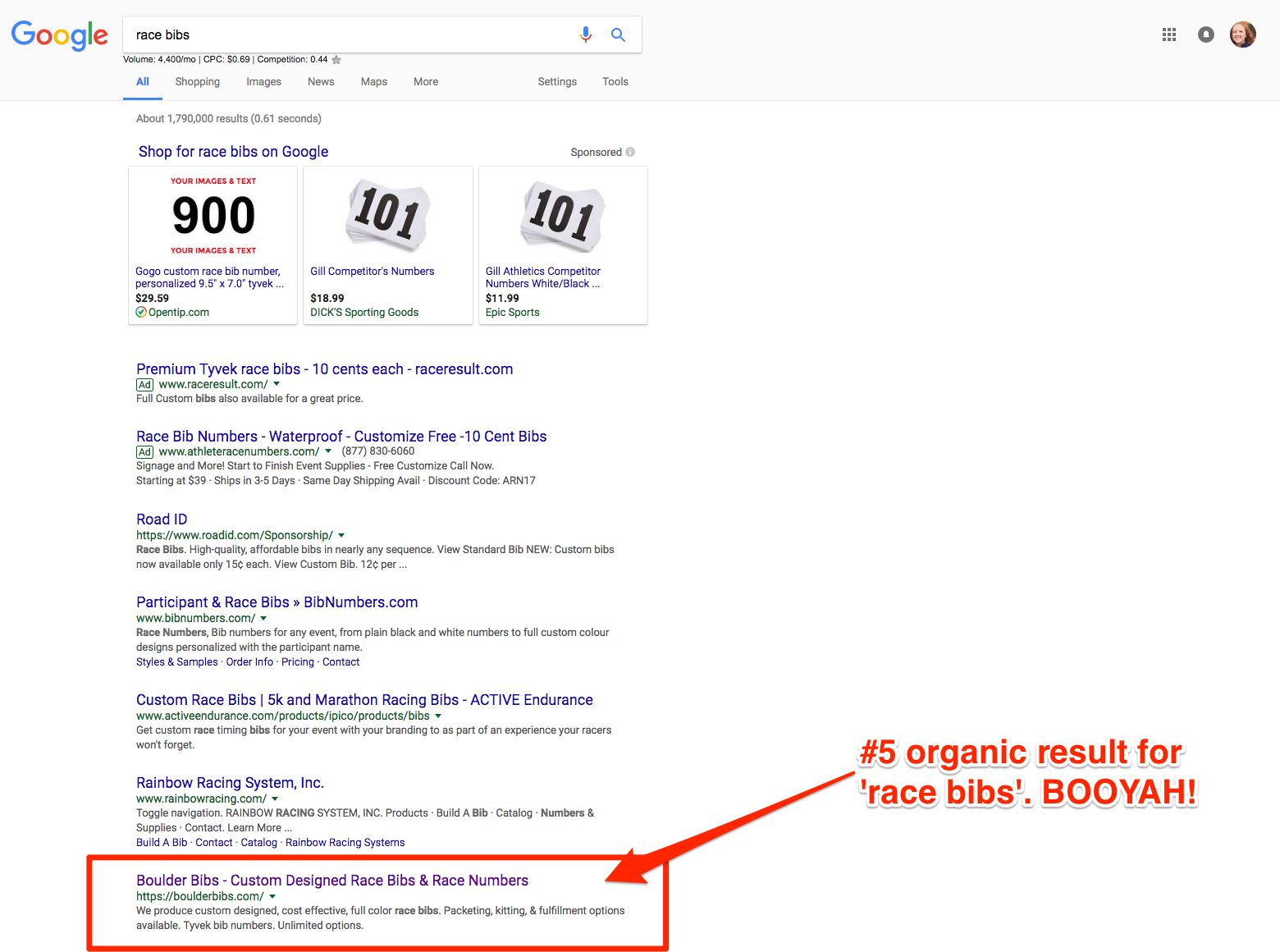 The technical term for ‘those things runners pin on their shirts with numbers on them’ is “race bibs”. However, the Boulder Bibs team realized that while experienced race organizers knew this term well, newbie race directors didn’t. “Race numbers” is a more common way for newbies to describe race bibs. So the team decided to target “race numbers” in addition to “race bibs” as a keyword category. The result of doing this was a new Google page 1 ranking for Boulder Bibs that now creates traffic and clients comprised of new race directors for smaller community races.

While these clients aren’t as big as Boulder Bibs’ well-known clients like Ironman, Ben describes two reasons why he’s happy to have them. First, “I know these clients will keep coming back year after year”—a high lifetime value—and second, “One out of ten of these small races is going to go big”—more bib sales from a big client, captured before they went big (this happened to them with the Tough Mudder race!).

Ben told us several times he was “really happy with Verblio.” And the feeling is mutual! 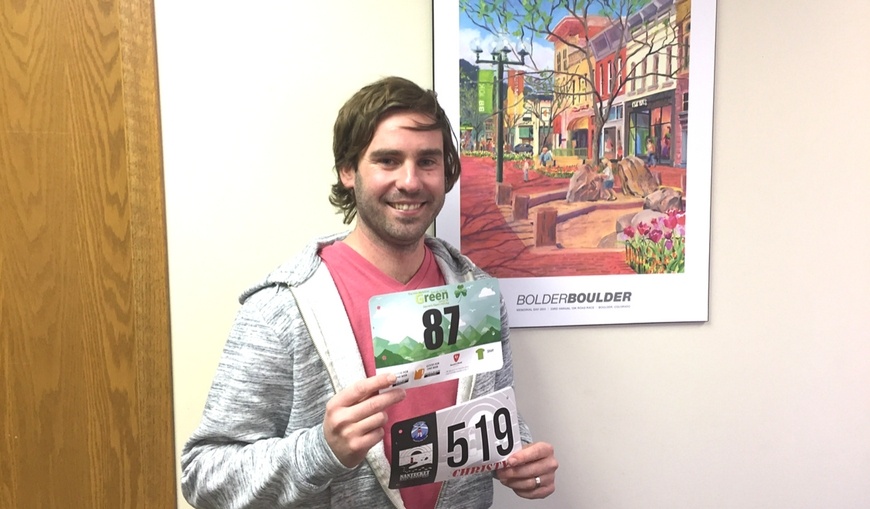 Let’s break down just why Ben and Boulder Bibs have been so successful using Verblio to boost their organic rankings on Google using SEO:

Ready to get started figuring out how you can replicate Boulder Bibs’ success with blogging for SEO? Fill out the form below and let’s talk strategy.

Paul runs marketing at Verblio and is a self-proclaimed digital marketing and SEO nerd. When he's not helping sad, empty blogs find Verblio content, he enjoys writing and spending time with his wife and two daughters. His prerequisite I-live-in-Colorado activity is snowboarding.