Verblio writer Kaanii C. created this week’s 685-word sample post for the entertainment and music industry. Kaanii understands the entertainment industry from a lifelong musician’s perspective. Prior to a years-long stint writing for a global newspaper, Kaanii worked as a guitarist and vocalist in numerous bands and musical productions. Today, she is married to a world-renowned luthier and performs occasionally. Together, they are building a recording studio in California wine country.

This top-of-funnel sample post is an example of the type of content that you could use to promote your music store, recording business, or music school. By showcasing in-depth knowledge about guitar amplification, it educates the reader, while also demonstrating thought leadership around technical equipment. If you’re looking to promote your music business, Verblio’s writers can help you stand out to your readers online.

Here’s a quick engagement video we created for this post using our new Verblio Vid service to provide a summary of this piece, share on social media channels, and embed on our own blog.

If you’re like a lot of budding musicians, you want to record an album, but the per-hour price of booking a professional recording studio is simply out of reach. Does this mean your band will have to play for tips in grungy dive bars until you’ve saved enough cash to cover the cost? Not necessarily.

Choose the right gear and learn how to use it, and you can achieve the sound you desire in your home recording studio. With this in mind, let’s talk about electric guitar amplification. 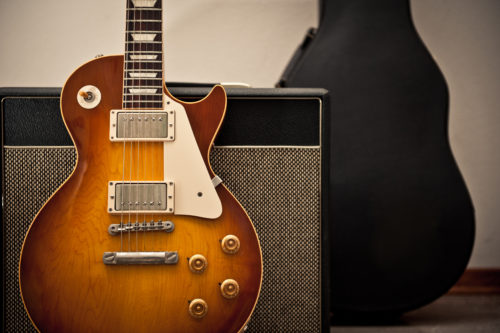 Ask around, and most electric guitarists will tell you that they overwhelmingly prefer tube amplifiers over solid-state amps. Reasoning runs the gamut from warmth to “realness” to delicious distortion, but all agree that the natural sound of a tube amplifier can’t be replicated with solid-state technology.

When factors such as wattage and speakers are identical, tube amplifiers are significantly louder than solid-state transistor amps.

Also known as “tube-valve” amps, tube amps such as those made by Marshall and Vox provide strong, even harmonics that add a sweetening complexity to electric guitar sound. This is especially important to lead guitarists who play loudly while over-driving their amplifiers by increasing gain control or striking the strings harder, says Mills College physics professor David Keeports.

In the Journal of Physics Education, Professor Keeports explains that while solid-state diodes and transistors are cheaper and easier to replace than glass tubes, guitar amplifiers made with them are known to create odd harmonics that can be dissonant to the human ear. According to the professor, experienced guitarists don’t only play their instrument–they also play the amplifier to adjust timbre and volume.

The physics of sound

In the recording studio, sounds may be visually represented by sine waves on an oscilloscope. When valve tube amps are moderately over-driven, they flatten the top, or crest of a sine wave to create an asymmetric wave with a rich, harmonious sound. Drive them further, and valve tubes flatten the bottom, or trough of the wave, as well. This provides a symmetrical wave chock-full of fascinating harmonics that delight the ear. For lead guitarists, this sensitive and responsive valve function is imperative.

If you think of the transformer as the heart of an amp and the pre-amp as the brain, you may understand the glass vacuum tubes as the soul of your guitar amplifier. The difference in sound texture proffered by each type of tube is subtle albeit important, explains music gear expert Seymour Duncan.

EL34 is a classic glass amp tube that’s been used in Marshall amplifiers since the 1950s. Comprised of a cathode, anode and three grids, the Philips patented pentode design of the EL35 provides a classic “British Invasion” sound with a strong mid-range and dirty, aggressive tone. If you seek a gnarly Hendrix sound, this may be the tube for you.

6L6 is an American-made beam tetrode tube that comprises just four elements. Providing less distortion than the pentode design, this is the tube you hear in classic Fender Bassman amplifiers. With a less aggressive mid-range, the 6L6 (sometimes called a 5881) offers cleaner, more fluid tones than the EL34, explains Seymour Duncan.

EL84 tube is a powered pentode that offers more gain than similarly sized valve tubes. Tonally, the EL84 is more sensitive and gives up more bark than typical tubes and is just right for lead players who seek a dirtier guitar tone.

6v6 is a physically smaller tube that offers sparkly top end tone with a crunchy, chewy bottom that cannot be achieved with EL34, 6L6 or EL84 tubes. Less gritty than the EL84, a pair of 6v6 tubes showcases the Larry Carlton sound on Steely Dan numbers such as Kid Charlemagne.

Of course, electric guitarists are as individual as the instruments they play, and some do prefer the lower cost and superior reliability of a solid-state transistor amplifier. Our advice is to test drive a number of amplifiers before committing to any particular gear.