Legal Sample Post: Can I Sue the Government if My Motorcycle Crashed on a Poorly Maintained Road?

About the author: Jessica M. is currently a PhD student in political science at a top 25 research university, the University of Minnesota. At Verblio, she’s a member of our elite pool of writers specializing in law, who ensure that all of our legal content meets advertising compliance standards. In this 1,000+ word sample post, Jessica shares her knowledge on potential of having a case against the government if you find yourself in a motorcycle crash on a poorly maintained road.

Before we dive into the piece, here’s a quick teaser video we created for this post using our new Engagement Video service:

Florida has a long-held reputation as a favorite destination for bikers. Tourists flock to Daytona for bike week. Motorcycle enthusiasts lucky enough to live in the Sunshine State can ride all year-long.

Yet, Florida also has an unfortunate history of topping annual national rankings for the number of motorcycle crashes and fatalities on its roads. The Florida Department of Highway Safety and Motor Vehicles reported more than 9,700 motorcycle crashes on Florida roads in 2017, resulting in 515 fatalities and over 7,700 injuries. The vast majority of motorcycle accidents were caused by motor vehicle driver inattention. Some of them, however, occurred because a rider lost control on a poorly-maintained road.

In this post, we discuss the legal options potentially available when a motorcycle crashes because of the poor conditions of a public road. 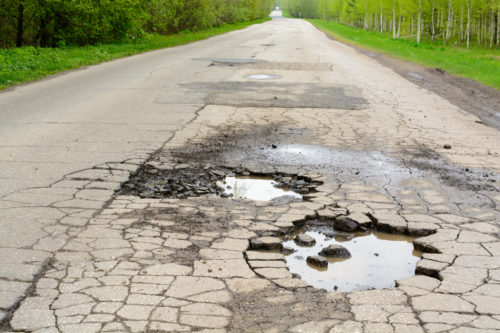 What Makes a Road “Poorly-Maintained”?

There are a variety of hazards that might cause a motorcycle accident when a road is poorly-maintained. Some examples include:

These road hazards do not always result from someone’s negligence, but that is often the case. To help distinguish between road conditions caused by an “act of God” and those that proper maintenance could have prevented or timely corrected, speak with a skilled personal injury attorney.

In the United States, federal, state, and tribal governments generally have the benefit of “sovereign immunity,” a legal tradition that extends back to the early development of British law. Its has its origins in the English common law principle rex non potest peccare, Latin for “the king can do no wrong.” Back then, sovereign immunity protected the monarch from his subjects. In 21st century America, the same principle bars suit against government entities unless they have consented to it (typically through passage of a statute).

Because governments can waive sovereign immunity, the extent to which it applies to state, county, and municipal governments varies from state-to-state. Florida statutes, for instance, contain a waiver of state and local government sovereign immunity in personal injury actions. So, a citizen may sue the state, a county, or a municipality for a motorcycle accident involving poorly-maintained roads if:

Limitations on Claims Against the Government

Although Florida law waives state and local sovereign immunity under the circumstances above, it also includes two significant limitations that distinguish lawsuits against a government entity for personal injury from similar suits against private parties:

Procedures for Suing the Government

Filing suit against the government for injuries sustained in an accident caused by poorly-maintained roads is a more complicated endeavor than an equivalent suit against a private party. Before you can file a lawsuit against a government entity, you must first make a claim in writing to the entity that was responsible for maintaining the road in question. You must also notify the Florida Department of Financial Services of your claim. Time is of the essence in these cases. Suing a state or local government entity in Florida subjects your suit to a multi-tiered statute of limitations:

A skilled personal injury attorney who has experience with motorcycle accidents, and filing claims and lawsuits against the state agencies, counties, and municipalities will know how to navigate these complex rules and guide you through the process.

Why You Need a Skilled Attorney to Sue the Government

When you file a claim or lawsuit, your opposing parties (and often their insurers) will try to avoid liability. Because a large adverse judgment could devastate the finances of a smaller county or municipality, local entities have a particular incentive to fight back hard. Skilled defense lawyers will seek to develop evidence to deny their clients’ responsibility, will attempt to downplay your injuries, and will often claim your injuries were caused by a previous incident or accident.

To stand your ground and prevail in a legal action for damages after your motorcycle accident, you will need a knowledgeable and skilled personal injury attorney who understands the stakes for you and for your opponents. Having an experienced attorney on your side will also facilitate investigation of the accident, smooth negotiation with insurance companies and municipal lawyers, and prevent your suit from getting bogged down in complications unique to suing a government entity.

If you or a loved one have sustained an injury in a motorcycle crash caused by a poorly-maintained road, then you may have the right to recover substantial compensation from the government entity responsible for keeping the roads safe. To learn more, call the experienced motorcycle accident lawyers at The Offices of Bob Loblaw to schedule a free consultation with a member of our team.