Pet Sample Post: Systemic Fungal Infections in Dogs, Could Your Pet Be Suffering from Spores?

This 1,500-word blog piece was written by Jennifer G., a Verblio veteran who has 10+ years of experience improving search engine optimization through content marketing for small and medium-sized business clients. An article like this one about systemic fungal infections in dogs might help attract potential clients who are seeking a diagnosis for their pet’s symptoms as well as establish a veterinary practice as being the authorities on a wide range of pet health issues.

Besides caring for many types of pets, Jennifer wrote a locally syndicated pet health and behavior column in the Pacific Northwest for several years. She also served on the board of her local humane society, ran a small rabbit rescue organization and worked closely with many veterinarians, especially those specializing in small and exotic animal care. She continues to write both features and marketing materials for veterinarians around the U.S.

Like bacteria, fungi are everywhere in the environment. Fungal spores live in dirt, on plants, and even on skin. In some cases, they can be inhaled—and while a strong immune system typically fights off these unwanted intruders, sometimes they can settle in and make your dog very sick.

Most pet owners are familiar with fungal infections like ringworm that affect the skin, often causing redness, hair loss and itching. More serious fungal infections can invade your dog’s body and cause medical issues throughout the body. Fortunately, if you observe symptoms and take your dog for medical care right away, an experienced veterinarian can diagnose systemic fungal infections and offer treatment to help your pet recover. 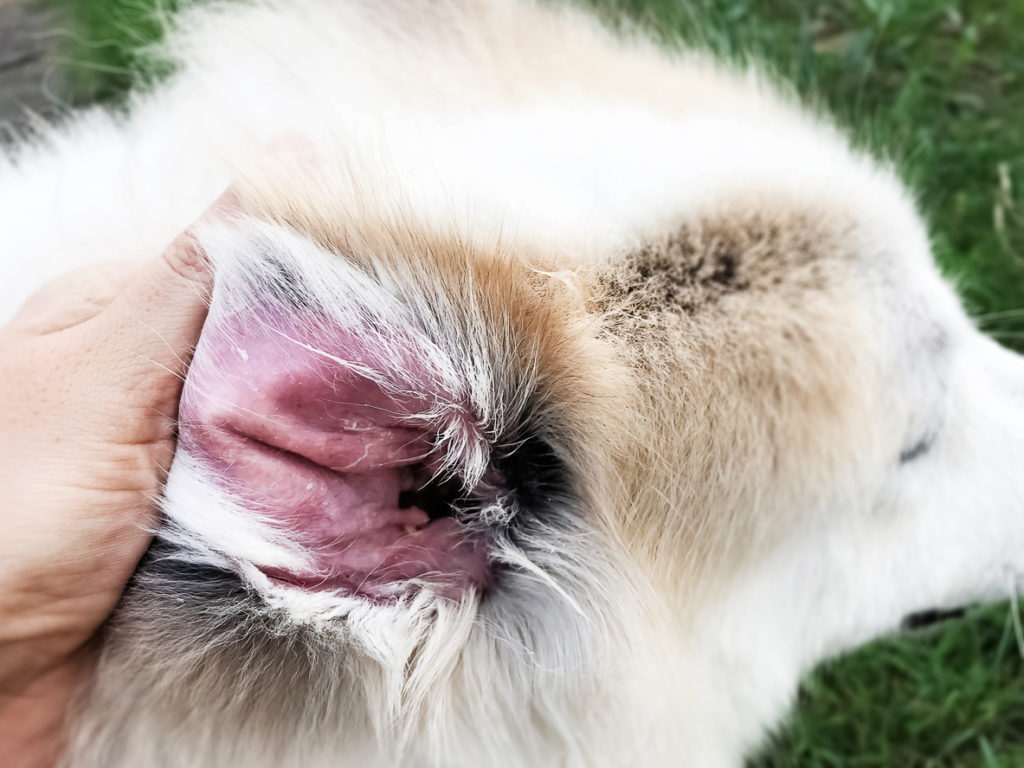 What are Fungal Infections?

You might think of mushrooms when you hear about fungus, and it’s true that mushrooms are one of the most well-known types of fungi. Most fungi, however, are tiny, parasitic organisms that live in soil. Millions of different species of fungi exist; however, the majority are harmless to both humans and dogs. As well, fungi that can infect dogs may not be an issue for humans at all. A few types of fungi can be inhaled or ingested and cause internal issues.

Once fungal spores enter your dog’s body, they can target different types of tissues. Some fungi take up residence in the respiratory system, the digestive tract or the joints. Depending on where the fungus sets in and begins to reproduce, you may see a variety of symptoms that could include coughing, lethargy and loss of appetite.

Fortunately, under normal conditions, developing a fungal infection is rare for both dogs and humans. That’s because the immune system prevents fungi from spreading throughout the body, just like it attacks and destroys invading bacteria or viruses. As well, resident bacteria on the skin and in the mucous membranes like the mouth and stomach destroy fungi so it can’t grow.

Skin infections caused by fungi are relatively common and can be spread via contact. In other words, you touch an infected person or animal’s skin or something like bedding or towels that have been in contact with the skin, and you develop ringworm. Humans might pick up fungal skin infections like athletes’ foot in the shower or locker room. Fungi on the skin doesn’t usually go any further, and while it can be time consuming and inconvenient to treat a fungal skin infection, it’s typically annoying rather than serious.

Systemic fungal infections, on the other hand, can be extremely serious. That’s because they move inside the body and take root on internal organs or joints. They’re tough to eradicate once they start growing and can do damage to the function and structure of the lungs, eyes or digestive system.

Different types of fungi invade the skin and the body, so you don’t normally have to worry that your dog will contract a serious systemic infection from a skin irritation. Systemic fungal infections are often contracted through digging in soil or inhaling spores rather than by contact.

What Symptoms are Common with Fungal Infections?

Because different types of fungi work on different systems of the body, symptoms can vary depending on the infection. Many systemic infections move to the lungs and impact the respiratory system, leading to coughing and shortness of breath. Some types will target the digestive system, so you may see diarrhea as a primary symptom. In still other cases, your dog will simply act like something is off—perhaps you’ll see a loss of appetite or fatigue that’s not regular behavior for your pup, but nothing that triggers immediate red flags.

Whenever you notice signs that your dog is acting abnormally and they persist for more than two or three days, it’s a good idea to schedule a vet visit. Because fungal infections are hard to quickly identify, and may require blood tests or other more invasive testing, it requires the trained eye of a medical professional to identify and diagnose fungal infections. The more quickly an affected dog begins to take anti-fungal medications, the more easily the disease is to treat.

What are Some of the Most Common Fungal Infections in Dogs?

Most healthy adult dogs will fight off fungal infections. But if your dog is older, already ill or on some types of medications that can reduce the effectiveness of the immune system, he or she may be more susceptible to picking up a fungal infection.

Here are some of the most frequently diagnosed types of infections.

Aspergillus fungus is often found in soil, grass clippings or hay. This fungus usually stays around the nasal area and can cause sneezing, swelling, discharge and bleeding.

In rare cases, the fungus spreads throughout the body; this is called disseminated aspergillosis and is most likely to affect German Shepherds and mixes. You will spot neurological issues as the fungi attacks throughout the body, but it can be very slow to develop.

The Histoplasma fungus is found in the soil and in some bird and bat droppings, and is usually inhaled. It’s most often found in the Ohio, Mississippi, and Missouri River Valleys, though it has been found around the world. The fungi will cause vomiting and diarrhea as well as a cough, fever and sometimes eye irritation. You’ll usually notice that your dog is losing weight fairly quickly.

Treatment: Your dog will need to take an anti-fungal medication for several months. Your vet may require hospitalization and use of subcutaneous fluids to stabilize your pet and prevent the infection from getting worse. If not caught in time for treatment, histoplasmosis can lead to death.

The Blastomyces fungus lives in rotting wood, damp soil and bird droppings. If you live near the Mississippi, Missouri, Tennessee, or Ohio River basins, the Great Lakes or in the Pacific Northwest, your pet may be more likely to pick up Blastomycosis. There’s an increased risk for hunting dogs, who are more likely to run through areas contaminated with this fungus.

Most of the time, Blastomycosis impacts the lungs and causes coughing and difficulty breathing. It can also move to the eyes and could lead to blindness if not treated. You’ll likely also see weight loss in your pet and possibly a fever.

Treatment: Anti-fungal medication for at least two months. In about 20 percent of dogs, Blastomycosis can re-occur after treatment is completed.

Also called Valley Fever, Coccidioidomycosis is caused by the Coccidioides fungi found in dust or dirt, usually in areas like the deserts of the southwestern U.S. where there isn’t much rainfall. Most of the time, spores are inhaled and the infection is limited to the lungs, causing a chronic cough. If your pet is very immuno-compromised, the fungus can spread to other parts of the body.

Treatment: Anti-fungal medication for several months. Most cases can be successfully treated.

Mainly found in cats, sometimes the Cryptococcus fungus can infect dogs. When it does, it’s usually serious. This fungus is found worldwide but is often in bird droppings. Cryptococcosis can spread throughout the body, causing symptoms that range from lethargy, coughing, nasal discharge, eye problems, skin lesions and less commonly, seizures and other neurologic problems.

Treatment: Anti-fungal medication for as long as a year. Sometimes, Cryptococcosis infections can be deadly.

Several other types of fungus can cause canine fungal infections. Many of these commonly take up residence in the lungs. If you notice your pet exhibiting signs of respiratory issues like breathing abnormally, coughing or showing nasal discharge, it could be symptomatic of a fungal invasion. In addition, unusual behaviors like eating less or showing signs of low energy could be an indication that there’s a health issue caused by fungi.

Can Fungal Infections be Prevented?

You won’t find a vaccine or preventative medication that can keep your dog from developing a fungal infection. However, a dog in good health is much less likely to become ill with a systemic fungal infection. The best way to keep your dog healthy is to feed a well-balanced diet, get plenty of exercise and see a veterinarian for regular check-ups.

If you live in an area where certain types of fungal infections are more common, you may wish to keep your dog from digging around in damp soil. Always do your best to prevent your pet from stirring up bird or bat droppings and stay out of areas where there are large quantities of fecal matter.

You may not be able to prevent a fungal infection, but you can be aware of the symptoms and seek medical care without delay if you suspect your dog may be infected. Rapid weight loss, coughing that lasts more than a few days and fever are all symptoms that should be checked by a qualified veterinarian.