Travel Sample Post: An Insider’s Guide to a Trio of Top Festivals in India

In this 2,001-word article, we’re showcasing long-form content for the travel industry. Whether you are helping adventurous travelers plan their next expeditions, or would like to highlight the hot spots around your local area, a long-form piece such as this will provide readers with a comprehensive overview of the sights and and experiences that are available in a region.

For this piece, we worked with veteran travel blogger and experienced Verblio writer, Kirstie G., who is a freelance travel writer who grew up in a multicultural mecca just outside of Cleveland, Ohio. She loves to explore the hidden gems each region of the world has to offer, and has written a diverse range of articles exploring the great culinary, recreational, and cultural adventures found throughout the United States, Europe, Central and South America, Asia, and beyond. Her travel anthology Traveling Towards Enlightenment explores the places where the ‘open road meets the soul’.

To supplement this article, we’d like to show you a quick teaser video we created for this post using our new Verblio Vid service. We use video to share on social media channels, and embed within our own blog posts:

India’s fabulous festivals have a unique knack for fusing religious intrigue, ancient traditions, and evolving cultural norms to create a one-of-a-kind travel experience full of both pomp and pageantry. If you are getting ready for a trip to India this year, planning your trip around one of these festivals is a terrific way to experience the uniquely joyful cultural traditions of the region.

In this comprehensive post, we break down all the sights and sounds of three spectacular galas that make the country one of the best spots in the world for those who love to celebrate life.

From its ancient origins as a ceremony performed by women to ensure a healthy and happy family, ‘Holika’ has morphed into a variety of festivities that tie together themes of kinship and love with a countrywide celebration of spring. The holiday also bridges in spiritual themes of good vs. evil to create a day when divisions are set aside and unity reigns supreme. For this reason, it is often called the ‘Festival of Love‘. 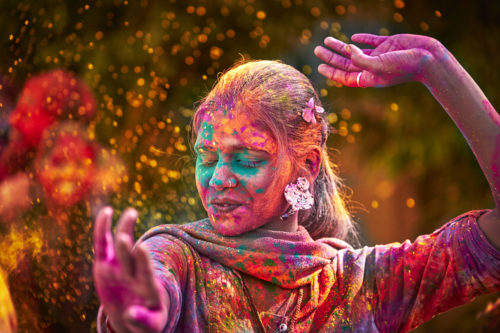 Here are some of the most unique and enchanting 2019 Holi Festivals from across India:

GANESH CHATURTHI, MAHARASHTRA AND BEYOND, SEPTEMBER 2-12, 2019

You may have seen caricatures of the elephant deity Ganesh, and he’s the reason that India has a reputation for viewing the tusked descendants of mammoths with awe. Tradition states that Lord Ganesh oversees good fortune and wise choices, and creates a clear path for smoothly reaching life goals. This is why he’s often called upon during lavish Hindi wedding ceremonies, where grooms arrive to much pomp and cheer on a white horse that signals their move into a new, more responsible phase of life.

The 11-day celebration of Ganesh Chaturthi originated about 125 years ago in Pune, Maharashtra as a peaceful way to unite the Indian people in solidarity against British rule, and has since spread out from the city and across the state, as well as to such areas as Dehli in the country’s north and Tamil Nadu in the south. If you are in these areas during early September of this year, you’ll want to be sure to participate in this joyous festival time. The streets turn into a block party full of beautifully crafted statues, parades, prayers, music, and the immersion of the figurines into water on the last day to mark the continuous ebb and flow of life. 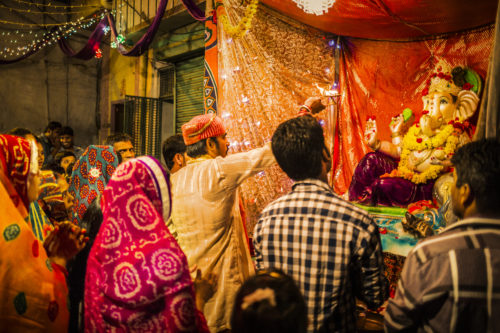 Although the festival is now widespread, there are 2 key areas within Maharashtra that offer visitors an awe-inspiring view into the origins and evolution of this unifying event that draws thousands of international guests each year. The singular experience has been likened to a public party full of fun socializing, celebratory spirituality, and delicious local cuisine.

This extravaganza is also known as ‘Kartik Mela’ (November Fair) or ‘Pushkar Mela’. Its variety of names is only outdone by its diverse range of epic events, exciting competitions, and colorful exhibitions.

Nowadays the century-long festival combines commerce and spirituality to attract upwards of 200,000 visitors annually, most notably the camel and livestock traders sporting bright-colored turbans who make a living from farming and transporting caravans across the desert. An astounding 20,000 camels join the many visitors at this multi-faceted, week-long celebration, which is the largest of its kind in Asia. 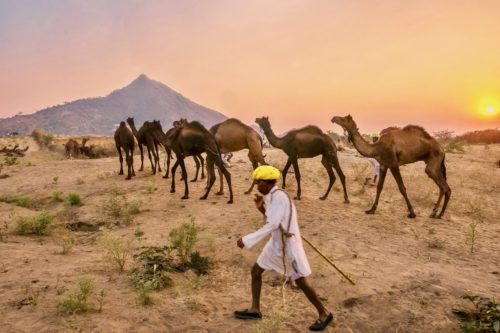 The state of Rajasthan tourism board teams up with the Pushkar ‘Mela Vikas Samiti’ (Festival Development Committee) to thrill visitors and support the local economy with numerous fun and engaging activities. Located in northern India, Rajasthan offers some of the most beautiful and scenic palaces and forts in the region.

Take a look at some top highlights of the amazing cultural festivities offered to 2019 guests:

Your visit to India can be even more enjoyable by following a few simple etiquette guidelines:

Most importantly, travelers to India are welcomed with open arms to fully participate in the vibrant pageantry of India’s most well loved national festivals, so bring your favorite ‘gulal’, your dancing shoes, and your appetite for adventure! And, if you’d like help planning and coordinating your upcoming journey to India, don’t hesitate to contact a travel agency that specializes in setting up exciting and culturally diverse tours.