This is the last post I’ll write as CEO of Verblio.

Feels a little weird saying that, but it would feel worse if I thought that I wouldn’t be writing again with a different title, or if Verblio didn’t have a very bright future. However, Verblio’s future is now brighter than ever.

Indeed, I’m just filled with joy writing this because I’m so happy to announce that Steve Pockross has agreed to join Verblio as CEO.

You’ll be meeting Steve little by little here in the blog, and more importantly you’ll see his handiwork as Verblio grows into a content marketing powerhouse.

How did we get so lucky? Hard to say, but here’s the story:

When I decided to step away from the day-to-day at Verblio, I assembled a small team to help find a new person to take the helm. The team included Verblio’s other founder, Wade Green, along with the “Dynamic Duo of the Boulder Startup World”, Denise and Jim Franklin. The four of us sat in a room and came up with 10 criteria we wanted the new CEO to possess.

That list had a bunch of the stuff you might expect. We wanted someone who’d run an operation that had grown from around 10 employees to around 100, someone who lived and breathed a modern management style that made work a joy and success a shared treasure.

Why He was the Best Man for the Job

And we wanted someone we would authentically enjoy working with. I’m staying on as board chairman, and Wade is staying on full-time running the technology side of the shop, so that was important to us personally. But we also wanted someone who would be great with the in-office staff, customers, and writers.

When we were building the list, I thought about adding an item that it’d be great to find someone with experience managing a crowdsourcing effort. I decided not to even bring it up. Crowdsourcing is so new and there are so few people familiar with it, especially managing a crowd in a real business.

At the large end, he ran new initiatives within LiveOps, one of the best-respected crowdsourcing companies, and an early pioneer at turning crowdsourcing into a real business.

Steve’s also started his own crowdsourcing project, a nights-and-weekends affair of the heart connecting the elderly to a crowd of people willing to schedule regular phone calls. Sweet, don’t you think?

Steve grew up in Colorado, did his undergraduate work in the East, spent a couple of years in South America; for part of that time doing business journalism, in Spanish. ¡Que fantastico!

He got his MBA in Chicago at Northwestern, spent his requisite early career time in the Bay Area, and is now settled here in Colorado with his wife and two sons.

I have to say, I’m a bit jealous of the Verblio staff. I’ve gotten to work with Steve for a few weeks getting him into place and it’s just been a delight. The guy is super strong on the fundamentals, but also understands that business is about people. He knows that it’s human beings who get things done, and all human beings come with an individual set of strengths, hopes and perspectives.

And as one of the more than 3,000+ Verblio writers, I’m really excited to watch Steve do his thing and grow the opportunities for all of us to do what we like to do the best: writing.

And as for our customers, the small businesses and agencies that serve small businesses… all I can say is that I think we’ve done a good job for you for the last five years. The only problem is that most of the 12 million small- and medium-sized businesses out there don’t know that it’s even possible to hire an outsourced writing service.

Soon you will. And then you’ll discover that the best in breed is a company named for no breed at all.

I’d like to wrap up by saying thanks. Thanks to the writers, the customers, the staff, those in the community who supported the idea of creating Verblio from scratch and turning it into the best blog writing service on four paws. I’ll be back here writing from time to time whenever Steve wants me to do so, and you can keep up with me over on my personal Scott site if you like.

Verblio is all about writing, and the one thing that makes writing really magical is that another human being is reading, so my last words are a way that I traditionally have used to close some of my more important posts.

I say this not as a throwaway line. This comes from a place deep inside of me and it reflects how I feel, and how Steve, our writers, customers and staff all feel:

To see the official press release announcement on Business Wire, read on here. 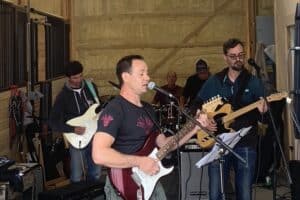 9 Things That Surprised Me as a First-Time CEO

9 Things That Surprised Me as a First-Time CEO