As I’ve slowly adopted and added Snapchat into my daily social media repertoire, I’m finding that it’s harder and harder to manage all my networks: Snapchat, Facebook, Instagram, and Twitter (as well as chat services like WhatsApp) without losing my mind.

The other byproduct of following all these channels is sifting through the feeds. OH, the FEEDS! There’s just so much on there I’m not interested in, seen before, or simply don’t want to ever see again. Everything starts to look the same.

So, I propose a more Zen-like approach to social media. A way to get your life back. These are suggestions. Not hard and fast rules. But the point is, take a step back and objectively look at your social media usage and determine if you should adjust how you use these channels.

Let’s tackle each major social media and find a more Zen-like approach to each.

Today, we’re going to focus on the big poppa of social media.

Stop and ask yourself: Why are you on Facebook?

I imagine many of you started using Facebook to keep up with friends and family. And then Facebook turned into the second internet where brands, sponsored posts, video, suggested follows, trending stuff, and a bunch of other things started cropping up. 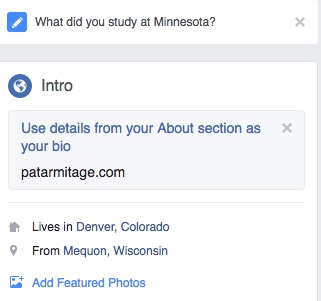 [Just look at everything Facebook wants me to do. DON’T YOU GUYS KNOW ENOUGH ALREADY?!]

I use Facebook to follow specific groups that I belong to and keep up with friends and family. Many of my friends and family are monotheistic when it comes to social media, so I have no choice but to play along on Facebook.

Are you seeing posts from people you don’t want to see posts from anymore? Unfriend them! I do an annual Facebook-friend spring clean and feel invigorated after I’ve unfollowed a bunch of folks.

Especially during this election cycle, Facebook has become a trash bin of people shouting their own polticial agendas and hot takes from their soapbox.

Don’t want to see it anymore? Hide them.

[I would NEVER unfollow my own mom. But I needed a post example to show you how easy it is to unfollow your mom.]

It’s almost impossible to figure out how to navigate Facebook’s byzantine privacy settings. That’s why it’s imperative to figure out what people should see and shouldn’t see.

I can’t tell you how many times I can go to a complete stranger’s Facebook page and see EVERYTHING. 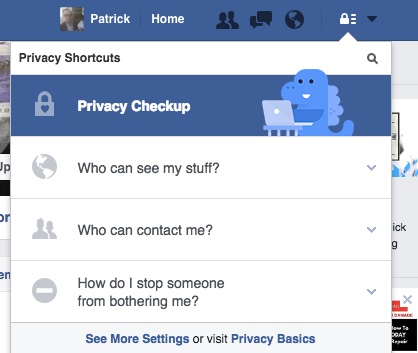 For the lazy, at least learn the privacy basics of Facebook. You can always add more security later.

And for real, even Mark Zuckerberg is paranoid about being spied on.

Don’t Take Yourself Too Seriously

How did something so fun become so toxic sometimes? People take themselves WAAAY too seriously on Facebook and we all need to take a collective breather sometimes.

And There’s Always the Nuclear Option

Don’t forget, you don’t HAVE to be on Facebook. The nuclear option is always available. Detonate your account and call it a day.