How to Craft Your Strategic Narrative with Andy Raskin

Episode 25 of The Verblio Show

Andy Raskin is the storyteller of Silicon Valley, with a list of clients that includes some of the biggest venture-backed names in tech. With a website that says simply “Strategic Narrative,” however, the question is this: What exactly does he do?

As one client told him, he “got their story straight”—and it was worth every penny.

Andy goes beyond traditional marketing concepts to craft narratives that reframe the world and reshape the buyer’s journey. In his conversation with Steve, he clarifies what a strategic narrative is and what it isn’t, and he offers actionable insights regarding who should be in charge of authoring it and where it should live. He also shares plenty of real-world examples, including the story behind Zuora and the greatest sales deck he’s ever seen.

What he does: Messaging mastermind and go-to narrative expert for venture-backed firms in Silicon Valley. Former software developer and journalist.

Find him on the web: Andy Raskin | LinkedIn | Twitter

Top Tips from This Episode

Create a narrative that is larger than just your company

Too often, a company’s narrative is all about them versus the competition, and how using them will benefit their audience. That’s not what makes a strategic narrative, according to Andy. “It’s a story that the buyer can have in their head that’s valid—and that is not dependent on the company itself,” he says.

An effective narrative goes beyond the company to describe some larger shift in the landscape. In the case of Zuora, that shift was boiled down to the idea of the “subscription economy” as a monumental change from the transaction-based marketplace of yesteryear. The “subscription economy” isn’t about Zuora or their offerings—instead it describes a bigger paradigm shift in a compelling way and, in doing so, creates a sense of urgency for the solution Zuora can provide.

Your CEO needs to lead the creation process

Andy typically works most closely with a company’s CEO rather the CMO. Why?

Rather than having marketing come up with a narrative that is then relayed back upstream to the CEO, the CEO should be the one authoring the story from the outset, with direction and input from the rest of the team. Ultimately, the end narrative will be driving every department, so every area should be involved—but it needs to start at the top.

Put your narrative in a sales deck

Marketing narratives often go in an internal positioning document that nobody actually sees. Not only does that keep it from having the kind of visibility and team buy-in needed to truly drive a brand’s story, but, as Andy points out, “A collection of messages does not tell you how to talk to somebody in a real conversation.”

A sales deck, on the other hand, is public. “It is something that the world is gonna see,” Andy says, and that allows you to get real feedback on whether or not it is resonating with your audience. It also forces you to distill your story down into a quick, focused pitch, requiring a discipline and clarity of intent you wouldn’t otherwise have with an internal doc.

The strategic narrative = the story in the buyer’s head

“We like to think that people make decisions by, ‘We have some problem, we’re going to survey all the options for solving it, all the solutions, rank them on some criteria, and then we’re going to calculate the best ranking and choose the best one.’

“And maybe this happens in some sort of trivial situations, but I think where someone’s really got some urgent thing, where they’re really going to take some bold action—it’s not that. It’s this story in their head that they’ve built by observing the world and discerning patterns for how to thrive. So the strategic narrative is really what’s in their head. And of course then the idea is—as a company, can we influence that? Can we try to maybe knock out an old one that was there and put in a new one that’s going to guide how they see the world in a way that benefits us?”

Nailing down your narrative can unlock a multiplier effect.

“There was this other point in the growth of the company where this mattered a lot…maybe in a way even more valuable than at the beginning where the company’s scaling, where there’s been a lot of success, but it’s all been kind of like brute force of the founders… And now we’re going to be hiring lots of marketing, lots of sales, and if we can get this story nailed so that the founder doesn’t have to be in the room—not only for sales, but for recruiting and for the product and everything—then this is going to have this multiplier effect on everything we do.”

One story to rule them all

“Just to be clear, we’re looking for the one story. There’s a lot of things I see—there’s the ten stories that a CEO has to tell, or the five stories of marketing. And all that’s valid, they’re definitely different types of communications you want to have. What I’m really looking for, though, is that one story that unites it all. …All the stories—to work well—should really be almost sub-flavors of that one high level story.”

“One of the biggest mistakes I see is that they make it like ‘The old game was, you were using our competitor’s software, and the new game is you’re gonna use our software.’ Some version of that, right? And that’s not what we’re looking for. A journalist should be able to go in without even looking at your company and its products and tease out this shift, this story.”

An effective narrative is about the world and how to thrive in it.

“If you just say, ‘Hey, you have a problem and we can solve the problem,’ then they may not understand why solving that problem really matters. And this story—getting this new story in their head about the world and how to thrive in it—that positions that problem as a kind of obstacle to thriving in this new world. Then that’s where the magic happens.”

[7:48] What is a strategic narrative? “It’s the story in the buyer’s head that guides their actions.”

[23:34] “Yes, people want to know what your stuff does. At the same time—and they may not say it or even know it—they want the context. They need context to understand why it matters and why it’s gonna be urgent.” 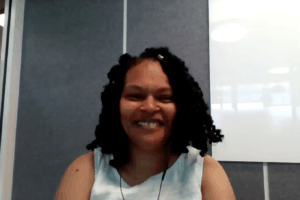