It Bends But Doesn’t Break: How Punctuation Is Like The Constitution

Copywriters spend an inordinate amount of time wrestling with punctuation. As a result, they become highly skilled in its use. They know the difference between and a colon and a semi-colon, they know how to cite a quote within another quote, and they will often fall into passionate rages regarding comma usage.

With so much of their brains devoted to the ins and outs of punctuation, they will also come to see parallels everywhere. 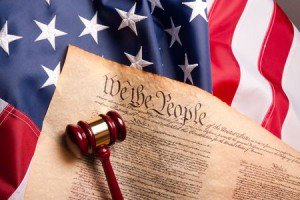 1. Both hold the fabric of society together – Society must be held to some sort of standard, otherwise everything would degenerate into chaos. Just as the Constitution holds all Americans to a standard in order to better ensure an equal opportunity for life, liberty, and the pursuit of happiness, the rules of punctuation keep written communication from unraveling completely. Without a set of standards giving shape to communication, written language would break down entirely. And we can’t have that.

2. Both require interpretation – The rules of the Constitution require judicial interpretation for full clarity, and the rules of punctuation call for a similar treatment. For example, readers well-versed in punctuation know that an author’s decision to set off a phrase using a set of dashes rather than a set of parentheses speaks volumes regarding his intent.

3. Both systems allow for change – Although it’s true that the Constitution holds people to a standard, society’s shifting mores occasionally call for change. Hence the amendment process, which allows the Constitution to bend without breaking. When the 13th Amendment abolished slavery and the 19th Amendment gave women the right to vote, healthy changes to American society were reflected. And although such changes tend to occur more slowly and with less fanfare in the world of punctuation, they do happen. Witness the ongoing debate over the legitimacy of the Oxford comma and the heavily-contested sentence spacing controversy.

These issues may take more time to settle, but for our children and our children’s children, there will most likely be new and firmly-establised rules to follow. Although many of us dread change, the truth is that permitting such shifts allows for our language to bend without breaking.

Who knows what further changes are in store? Perhaps copywriters of the future will make use of some as-of-now little-known punctuation options, such as the Irony Mark or the Love Point.

To harness the power of copywriters so immersed in language that they begin to see parallels between punctuation and the country’s governance, please feel free to contact us. We look forward to putting our skills at your disposal.

Editor’s Note: This blog is an example of the kind of writing you can get for your blog. The only thing that’s different is that it has the name of the writer. For your blog, you can say you wrote it. That’s fine with us. We’re happy mutts. Click here for more explanation of this series of posts.