How to Write Content Catered to Mobile Audiences: Brevity, Hooks, Headlines and Organization 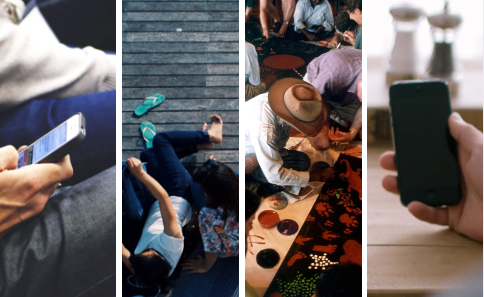 Did you know that 64% of Americans now own a smartphone? According to Pew Research Center, this number has increased from 35% in 2011.
Sixty-two percent of smartphone users have looked up health information via mobile internet. Fifty-seven percent have used it for online banking. Forty-four percent have gotten real estate listings. And 43% have used it to look up a job. This is just a sampling of all the mobile internet access taking place across the world. Which is why it has become so important to write in a way that holds the attention of this still-growing market.

How do you write content catered to mobile audiences? This is a medium which sacrifices screen size while increasing convenience. So you’re going to have a limited amount of space and time to hook your reader and get them to scroll down and read the whole article. If you write the way you would for the internet in general or a magazine article, the reader is going to be faced with huge blocks of text which are likely to scare them away. So keep in mind that you need to be more concise, more to-the-point, less meandering and more hard-hitting.

With different forms of media, you need to write in different ways. With books, it’s possible to write hundreds of pages about the same topic. But when it comes to magazines, you have to keep your articles down to a few pages. Writing for the internet necessitates a greater degree of succinctness. And the mobile phone, being smallest in size, requires you to tighten your writing even further.

However, keep in mind that you don’t have to trim your content more than necessary. There’s no point in shortening your blog posts and articles to such an extent that you leave out necessary content. At least, this is the point advocated by Neil Patel via the Content Marketing Institute. With appropriate succinctness, Patel says, “Instead of shortening your content, tighten your writing.”

This is something that’s been advocated by writing gurus since time immemorial. But it’s worth repeating because it’s so much more important when it comes to mobile content. People don’t see as much writing on a cell phone screen, so it’s important to make the things that they see more compelling than usual.

Keep in mind that people reading on the internet are generally used to paragraphs that are 4-5 lines long. However, 4-5 lines on a regular computer monitor probably equal at least 10-15 lines on a cell phone. And looking at such a dense paragraph is generally enough to scare most people away.

Subdividing your text, adding headers and using lists and bullet points work as well for mobile audiences as they do for internet audiences in general. So don’t be afraid of overusing these techniques.

Isn’t that an amazing hook? It’s the first line of Charles Dickens’ A Tale of Two Cities. And it just goes to show Dickens’ command over the language as well as his understanding of his audience. Even though we’re reading this quote more than a century later, it still resonates with us and makes us want to read more.

Just as the Dickens quote probably caught your attention, an interesting quote or statistic at the beginning of your article will hook your mobile reader. Make sure that whatever you use is relevant to the rest of the content and not just a gimmick. It doesn’t make any sense to begin an article with the name of a famous celebrity if the rest of your article has nothing to do with that person.

You can also write in a style like UK’s Daily Mail; summarize the entire article in bullet points right below the headline. Alternatively, you could highlight all the important, interesting parts of your article in the first paragraph.

Use a Short, Interesting Headline

Just like the beginning of your article needs to grab the reader, so does the headline. You need to keep the headline short and sweet, but make sure that it accurately conveys what the article is about at the same time. This is usually easier said than done.

In order to make people understand what you’re writing about, you might often feel like you need more words. However, these are best avoided, especially when it comes to mobile content. You don’t want your headline to get cut off because a person’s phone screen was too small. Similarly, you don’t want it to take up so much space that your carefully written “hook” isn’t immediately visible.

Contact us for creating writing content catered to mobile audiences or check out our blog for ways to optimize your content for an increasing mobile audience internet readership.

Want to start a blog but not sure how to get there?