What a WOOFtastic week! Here’s your digest of all the words of the day this week:

Monday: Sixteen Hours (Durations: An Encyclopedia of How Long Things Take, 1977)–(1) One day on Neptune, (2) the daily sleep requirement of an infant in its first 15 days, and (3) a duckling reaches critical imprinting age

Tuesday: Rigg Poetry Judgment Test (1968 Dictionary of Personnel and Guidance Terms) — a test for measuring one’s ability to discriminate good poetry from bad poetry. A short poem is presented in the original and in a distorted version; the subject indicates which selection he regards as the better poetry.

Wednesday: Anaximenes (1994 Dictionary of Scientists) — (fl c. 500 BCE) Ancient Greek philosopher who believed that air was the first principle. Also believed that Earth and all other heavenly bodies were flat and floated on air like leaves.

Thursday: Echo (1987 Namesakes) — a chatty Oread (a mountain nymph) who loved the sound of her own voice. Hera punished her for having an affair with Zeus by only allowing her to speak the last words that were spoken to her.

Friday: Allelopathy (1997 Taylor’s Dictionary for Gardeners) — the release of chemicals by a plant to inhibit the growth of other plants in its immediate vicinity. This is why tomatoes won’t grow near walnut trees.

This compendium reads like a little encyclopedia (ahem, from the Greek ἐvκύκλιος (enkuklios, encircled) and παιδεία (paideia, educating a child))! Who knew that it took ducklings sixteen days to reach the critical imprinting stage? Or that a mountain nymph is called an Oread? And most importantly, that allelopathy even exists! What a marvelous world we live in. It becomes even more astonishing when we find out something like the fact that plants can have such an active role in their environment and lives. 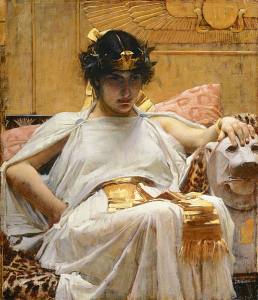 What do you think about the Rigg Poetry Judgment Test? In case you missed it, here’s an example from Rigg’s test. Which is better poetry, selection A or selection B? Drop us a line if you need his answer.

(A) She walks in beauty, like the night / of cloudless climes and starry skies; / And all that’s best of dark and bright / Meet in her aspect and her eyes

(B) My love is very beautiful / as beautiful as night; / Like starry skies are her two eyes, / a rich and lovely sight.

Arguably, the test might seem somewhat silly, since many think of the quality of poetry as subjective. But on the other hand, there are clear and useful principles and forms which dictate aesthetic value. After all, literary criticism has been around since literature itself. Do you think there are measurable standards for good and bad poetry?