Look out, Google. You too, Bing.

According to HubSpot’s new State of Inbound’s findings released on Sept. 12, which will not come as any surprise to the tapped-in, modern marketer, consumers’ use of mobile devices continues to increase. For their primary device to access the internet, consumers report tablet (11%) and smart phone (33%) use, which now, in 2016, essentially splits the board with computer/laptop (56%). 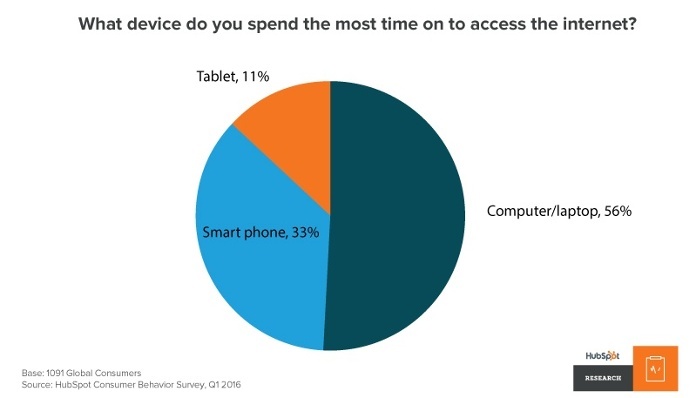 With it, too, use of social networks or other apps/newsletters of curated content (think Nuzzel, Redef, etc.) are rising rapidly in importance for seeking out new content and getting burning questions answered.

Not surprisingly, the lion’s share of these increases are represented by Facebook, Twitter, and LinkedIn. Over the past two years, the appetite for content through social media channels has increased by 57% on Facebook, 25% on Twitter, and 21% on LinkedIn. Also rounding out this list of juggernauts are apps rising in popularity/usage such as Slack, Medium, Flipbook, and Feedly, which have seen more modest gains in the last two years. 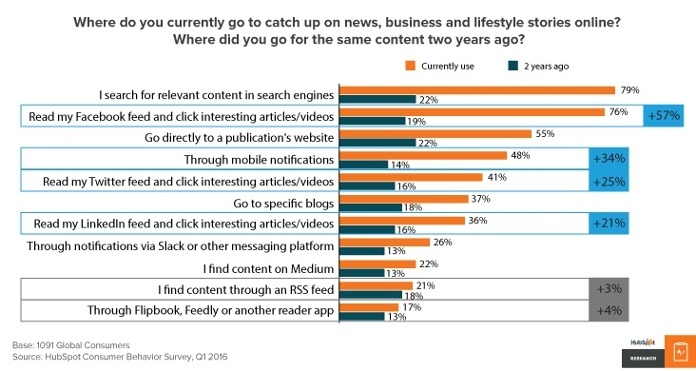 Further, of the content types that marketers want to see more of in the future, social media posts climbed to the top of the list at 45% of respondents. Not far behind were videos at 43%, a major contributor to voracious mobile consumption.

Believe me, I’ve poured over the pages of HubSpot’s State of Inbound. I do every year. For the modern marketer, this information is invaluable to staying on the pulse of the industry and keeping tabs on trends, and HubSpot, the giant in marketing automation, garners compelling takeaways each and every year without fail.

Heck, we even wrote a whole other post about the role of mobile notifications in the future of content and publishers based on the same research and findings.

What struck me as the single most compelling finding as I poured over the report (besides how freaking quickly people in the Latin American countries can whip out blog posts, but I digress) was that Facebook is up to 2 billion searches per day and does nothing but gain ground in leaps and bounds.

Notably, this outranks even Twitter, which is renowned for its strength in timely, trending topics and the immediacy with which that information is made available as compared with other channels.

In its relentless pursuit of its users’ time and eyeballs, Facebook began offering a compelling search feature starting in late 2015 to compete with Twitter’s Trending Topics in its own ‘Trending Stories’.

Since then, impressive droves of Facebookers have found they don’t need to leave the social network any longer to keep up-to-date with news and content from publishers, while still also tapping into their social networks for information on the same happenings. (Somewhere, Zuckerberg is smiling.)

Result of Facebook’s search engine: Facebook continues to swim in piles of favorable metrics like visits and average time per user. Pretty brilliant, if you ask me.

Wait so how does this impact traditional search engines?

The full impact upon search engines remains to be determined, as queen bee Google has held steady at a consistent figure of at least 3 billion searches per day.

However, as mobile users’ preferences continue to reign supreme in marketers’ minds and the driver of marketing decisions that’ll land, Facebook will no doubt aim to improve its search function and fully compete with the Googles of the world (sorry, Bing).

Download the full HubSpot report below for more 2016 findings.