Episode 59 of Yes, and Marketing

If you spent 7 years interviewing founders and CEOs of Inc 500 companies, what would you learn?

Gene Hammett has been interviewing industry leaders as host of the Growth Think Tank since 2014. With over 700 episodes to date and recognition from Inc.com and Entrepreneur as one of the top leadership podcasts, he’s seen firsthand what successful leaders of high growth companies have in common. On this episode, he shares some of those traits, in addition to other lessons for leaders:

💥 What he does: Executive coach, author, speaker and host of the Growth Think Tank podcast.

💡 Get smart: “You’ve got to be willing to reinvent yourself as a leader and reimagine your role as a leader. Because if you were able to look forward five years and really define how you’re going to provide value to the organization, it wouldn’t be doing the same things you’re doing today.”

Of the various traits Gene sees in leaders he coaches and interviews, transparency stands out. Not only can transparent communication differentiate a business in the marketplace, but it is also vital internally for creating an environment where everyone feels ownership.

He gives the example of HubSpot, which made every employee a designated insider when it went public. “They thought it was so important to the structure of how they engage and how they work,” Gene explains. That degree of sharing, he says, constitutes truly “remarkable transparency.”

The impossible question—and the right answer

“I call it the impossible question: As a fast growth leader, what’s more important, your customers or your employees? And when I was tracking the data and writing it down in my spreadsheet and saying, ‘Who said what?’ over 94 percent said its employees come first.”

“Values are a very important aspect of putting employees first and creating a place where people love to come to work. They create meaning in the workplace. Values provide guardrails to what we’re doing here.”

How hosting a podcast stays fresh after 700+ episodes

“If I do my job well, I’m going to have a conversation where I pull out something unique that I never have heard before.”

“Everyone has what I call the transparency line—where you feel comfortable sharing, and where you draw the line to say, ‘I’m not going to share that.’ If your transparency line is closer to the remarkable side, you’re going to share things internally with your employees. You’re going to include things in there like detailed financials, as in profitability and the metrics that drive that, and the leading/lagging indicators, and you’re going to have conversations with people about how their job fits into each of these numbers.

When people understand the context in which they play a role, they’re much more likely to make decisions that support the growth of those because they know the importance of moving those numbers up.”

“A lot of people miss the opportunity to share the vision they’re trying to create. They don’t share their missions well enough. They’re just not communicating it well. Would you rather do a business with someone who is transactional, or someone who actually has a mission driven business?”

Let everyone connect the dots

“If you trust your team enough, empower them so you don’t have to be there just to see what’s going on. Then you can start to shift your focus to the most valuable work instead of just showing to  tune in to what’s going on. A lot of leaders make the excuse, ‘My job is to make sure everyone’s connected. I can see the dots.’ And I totally get that, but they should also create a culture of collaboration that allows people to share that information instead of having silos and relying on the CEO to connect the dots.”

When leaders most need a coach

“Leaders want people to feel like owners, even if they don’t have a financial stake.”

“Mostly people get stuck way too long in the founder mentality, which is to hold on to everything, to be a part of every decision, to be attending meeting they possibly can.”

“You’ve got to be willing to reinvent yourself as a leader and reimagine your role as a leader. Because if you were able to look forward five years and really define how you’re going to provide value to the organization, it wouldn’t be doing the same things you’re doing today.” 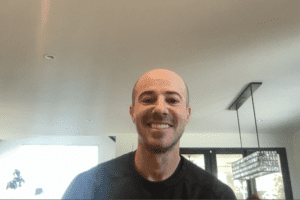