Episode 76 of Yes, and Marketing

In a post-pandemic world, the rules of HR are changing.

Jamie Bennett is a human capital strategist, consultant, and C-suite coach who works with businesses to build a strong HR foundation that will bring in positive returns—for both people and profits—down the line. In this interview, she shares insight on some of the biggest questions right now in both hiring and workplace culture:

Tap through the chapters above to listen, or read on for our summary of the conversation. You can also watch the full conversation on our show page.

💥 What she does: Human capital strategist, C-suite coach, and CEO of The Lifestyle Group.

🖱️ Find Jamie on the web: The Lifestyle Group | LinkedIn

When it comes to hiring, Jamie says “You have to be honest about yourself. As a CEO, do you want ‘yes people?’ Does that make you feel good? And are you willing to suffer the consequences of having people tell you what you want to hear, instead of the truth?” If, on the other hand, you want people willing to have those hard conversations, ask for examples of how they’ve handled those in the past.

And when you’re considering the importance of ‘cultural fit’ in the hiring process, it’s important to recognize what that term actually means in your organization. “I think there is a requirement for brutal honesty—really in your face, no fudging, making sure that culture is not being used in a way that means, ‘I want more people like me,’” Jamie explains.

“When we talk about cultural fit, we have to be prepared to call a thing a thing and make sure that’s really what it is, and that we’re not looking for golf partners or people who go to the same country club or the same school.”

“I like the idea of ‘human capital’ because when I’m in rooms with finance and business people, that resonates with them because they think in terms of capital—but you also have to think of the people you employ as your human capital.

You can have all the ideas in the world, but they won’t get off the ground without the bodies. And let’s not just think of them as human resources. They are a capital line, just like any other capital.”

People skills are a non-negotiable

“Professionals in 2021 don’t get to just be a marketer or just be an engineer or just be a cook. The people aspect of it as a leader has to come in, and if it’s not a natural skill, you have to develop it.”

The business case for better HR 📈

“If you start creating a dashboard around your human capital the same way you do around SEO and metrics, the numbers start to tell you a story. You have better retention. People are more productive. And you measure that by engagement surveys, and just by declining complaints.”

The golden rule in business

“‘Treating people how you want to be treated.’

One of the best manager managers I ever worked for was amazing because whatever benefits she took for herself, she extended to me. And so many managers don’t do that. People have the same desires that you have: work-life balance. So to be sitting in a C-suite and just having these benefits for yourself—it’s no longer the place to be.”

Real talk for a CEO

“I understand the startup world where you’re working at two o’clock and it’s just three of you. But when you get up to 50 and you still in the trenches, there’s something you’re not doing.”

Why DEI needs a B for Belonging

But the belonging comes in if you’ve not done the work for me to actually be able to bring my full self to work. …You do yourself a disservice if you come and get me, but then I’m not at the meetings where decisions are being made. I’m shut out. Those conversations where you have four people in the room and everybody is talking to each other, but nobody ever speaks to me—that’s the belonging aspect.”

One big lie the pandemic has exposed

“People really said, ‘Remote work will never work, Jamie. There’s just no way.’ And then we were forced to, and businesses survive. So what we’re up against is your old school management philosophy—not so much that something can’t work.”

“I like when they’re done by external companies, and I like when leadership does not break the data down to the point where they could say, ‘Well, that’s John over there in accounting talking about yada, yada, yada…’

The ‘who’ doesn’t matter, right? I like when a leadership team says, ‘No, we don’t need to aggregate it down to where people are identifiable. We just want to be focused on the trends, how people are feeling and what is in our power to improve.’”

“People don’t necessarily need to be watched like it’s 1950 to be productive.”

“It’s cheaper to keep your people that are already acclimated into the culture.”

“Research shows that people actually take less time when you have an unlimited [vacation] policy.”

Jamie’s recommendation for every bookshelf: The Leader’s Guide to Unconscious Bias: How to Reframe Bias, Cultivate Connection, and Create High Performing Teams. 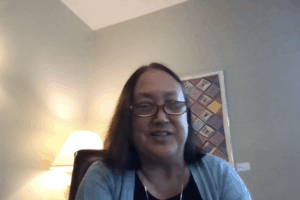