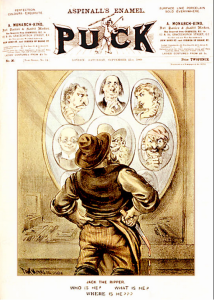 Since Thanksgiving was last week, there was no round-up. Instead, we’ve combined last week’s and this week’s Words Of The Day into a double WOOF round-up. Today, we’ll look at the theory that the elusive 19th-century killer Jack The Ripper was actually a woman: Jill The Ripper.

If you’re not familiar with the story of Jack The Ripper, here’s the basic outline: In late 1800s London, over the course of a few years, between five and eleven women were gruesomely murdered in the same manner in a small area, though it’s unclear exactly how many of the murders from this time and area should be included in the final tally. The killer was never identified, but was given the pseudonym Jack The Ripper.

From the beginning, there was wide speculation about the killer’s identity: a prince gone made from venereal disease, a doctor (the murders were surgically precise), and a bootmaker who had prior assault offenses. Much later, some people even suggested that the killer was a woman, Jill The Ripper.

Why is this idea surprising? 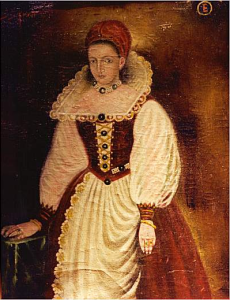 It’s true that there are fewer female serial killers than there are male serial killers, but that sure doesn’t mean that there aren’t some really scary ones throughout history. Take a look at the Blood Countess of Hungary, Elizabeth Báthory, who may have killed hundreds of young women in the 16th century and bathed in their blood to ensure her youth (okay, that part is unverified, and based on one person’s testimony, but it’s creepy enough to mention anecdotally).

Jack The Ripper’s victims — who were all women — were murdered with knives. Interestingly, murder with weapons is not usually ascribed to female killers. It’s thought that when women kill, they usually use poison. Take Alfred Hitchcock’s “One For The Road” episode from Alfred Hitchcock Presents, as a pretty typical storyline.

But why do we assume that women usually use poison when they murder? 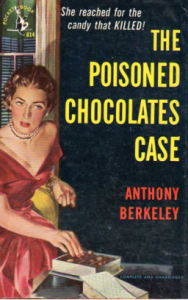 In Wired’s article, The Myth Of The Female Poisoner, a study is cited, suggesting that poison was usually used by women because they were traditionally in charge of food preparation and shopping, which meant that they had ready access to poison, and simply had more opportunities to use it surreptitiously. Turns out, though, that murder-by-poison isn’t so gendered today: though men murder more often than women, men use poison just as much.

So, leaving behind our gendered bias that a woman probably wouldn’t have murdered using weapons, why does it make sense to suggest that the murderer was Jill The Ripper, and not Jack?

A bloodied midwife walking around the streets of London would probably go more or less unquestioned, but a bloodied man likely would not. The female victims would probably have been more likely let a strange woman into their homes than they would’ve a man.

During this time, there were even some murders committed by a woman, Mary Pearcey, who more or less used a similar modus operandi to the Jack The Ripper killings, which makes Pearcey a person of interest.

So what’s the evidence? I mean, the really hard evidence that all those murders were committed by a woman?

Not much. One of the letters written to police at the time, claiming to be from the murderer, was found to contain a woman’s DNA, as was a shawl that was found at one of the crime scenes. But that’s it.

Tuesday: Intaglio — A precious stone with a figure engraved on it. (1874 Common-School Dictionary Of The English Language)

Thursday: Jack Be Nimble — Jack be nimble, Jack be quick / Jack jumped over the candlestick. Various pagan associations here. Pre-Christian fertility rituals involved jumping over fire or a broomstick. Being able to jump over the candlestick without the flame going out meant a prosperous year ahead. (2005 Heavy Words Lightly Thrown: The Reason Behind Rhyme)

Monday: Athlete’s Foot — O.J. contracted a fierce case of the ailment in jail, and it was so bad that blisters formed on his feet. Ironically, he never once had the common fungus infection while he was an active athlete. (1995 OJ A To Z: The Complete Handbook Of The Trial Of The Century)

Tuesday: Ambrose Chitterwick — A fictitious amateur detective from mystery novels in the 1930s. The least likely detective: a blue-eyed, mild-mannered milquetoast of absolutely no physical or mental distinction who somehow manages to solve crimes and baffle professional police detectives. (1977 Detectionary)

Wednesday: Opinion — “So soon as I discover my opinions to be erroneous, I shall be ready to renounce them.” — Abraham Lincoln, Address to the People of Sangamon County, 1832. (1959 Lincoln Dictionary)

Thursday: Fine Kettle Of Fish — A mess; something gone wrong. A kettle of fish was once a conspicuous item at Scottish picnics, whereat gentleman would entertain guests with tents and fish being thrown into kettles. One can imagine things going wrong very easily. (1985 The Dictionary Of Cliches)

Friday: Jill The Ripper — Generic term for stories suggesting that the murderer was a woman. Sir Arthur Conan Doyle proposed that a midwife in a bloodstained apron would pass unquestioned, and suggested that a male murderer might’ve disguised himself as a woman. (1991 The Jack The Ripper A To Z)