This is your WOOF Compendium, wherein we compile the WOrds of the day from the dictionaries OF the day for your review. 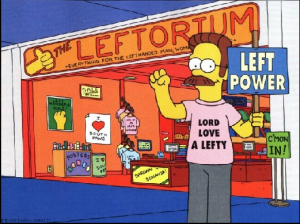 One of our favorite words this week was the adjective sinistrous (and its equally cool-sounding cousin, sinistral). Of course, the word sinister most commonly has the meaning of being evil or under-handed. But it comes from the Latin word meaning “left.” So, at what point did the left side and the idea of evilness become associated?

In Ancient Greek augury (the interpretation of omens and foretelling the future), observing birds or other omens coming from the right was favorable, but in Roman times, it was favorable if those omens were observed coming from the left. In its Latin usage, sinister did retain some of its meaning of good luck when used to talk about omens, but did carry the meaning of being unfavorable or wrong, in poetry and in post-Augustan prose. For example, in his Georgics, a 29 BCE work on agricultural topics and poetry, Vergil says:

For Notus (the South Wind), presses up from the deep, unfavorable for trees and crops and cattle.

In the end, it looks like from the very beginning of the word, sinister was both associated with the left, and with some degree of unfavorableness. One source cites the connotation of evil, and not just being unfavorable, with the word sinister as not occurring until 15th century Latin.

WOOFs From The Week

Monday: Sinistrous — 1. Of, pertaining to, or directed toward the left; sinistral. 2. Sinister; unpropitious; ill-omened [from the Latin, sinister, left]. (1951 Funk And Wagnalls New Practical Standard Dictionary Of The English Language)

Wednesday: Bildungsroman — A class of novel in German literature that deals with the formative years of a main character. A coming-of-age story. It always ends on a positive note. If the grandiose dreams of the hero’s youth are over, so are many foolish and painful disappointments. (1995 Merriam Webster’s Encyclopedia Of Literature)

Thursday: Cryptobiosis — The condition of an organism that must in theory have at one time existed, but has left no fossil traces. (1967 Dictionary Of Biological Sciences)