You’ve read many an evangelistic post on why a company has switched to a platform to reduce a pain point. The rinse-and-repeat, tried-and-true post formula of problem, rising action with searching out solutions, and the reaching of the promised land—a resolution and subsequent singing of a certain platform/interface/app’s praises.

Yes, it’s a story of how we at BlogMutt had a problem, researched solutions, and found a resolution.

But then we had another problem, searched for other solutions, and happened upon a different resolution.

And then, even after that, we encountered yet ANOTHER problem and ended up, more or less happily…long story…back at square #1 after three months. (Did I mention there were spoilers? Oops. Sorry.)

The problem consistent throughout our trials and tribulations is one familiar to modern marketers: Which of the social media services works best?

In documenting our experience we hope to inform others in marketing what did/did not work for us as a growing startup, and more than anything else, the hope is to illuminate which social media features emerged as must-haves, nice-to-haves, and straight up unnecessary ones for us.

If we can bestow any knowledge to other companies looking for answers to avoid having to reinvent the social media wheel three different times like we did, we’d sure like to do that. 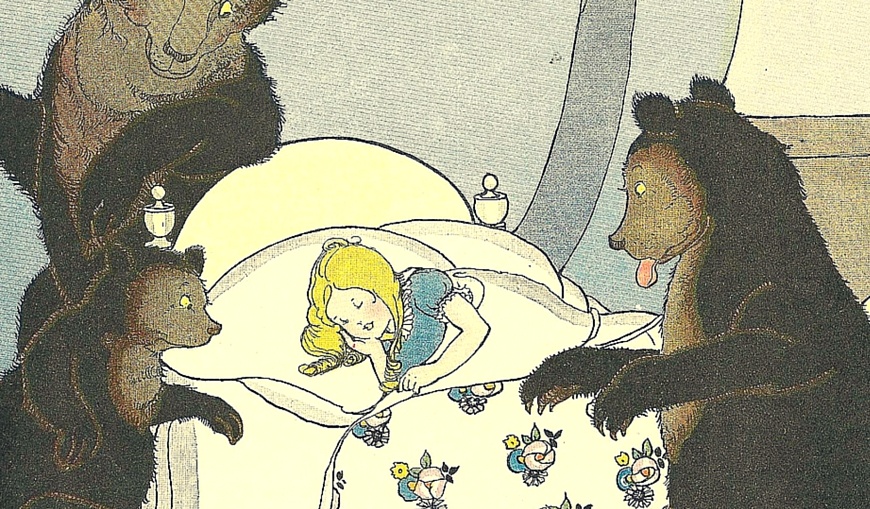 As HubSpot lovers and integration partners, we originally started with its social scheduling tool. It was a natural fit for us; everything was run from the one HubSpot dashboard. Every marketing channel, campaign, social/blog post, email, or workflow came from the same place. It was beautiful.

It ended up being too good to be true. Everything was going just swimmingly until one day, we faced a serious problem: The photos on our blog were too damn big.

HubSpot automatically pulls the featured blog post image (and every other image, too!) into every social post update draft. Awesome!

Except… the high-resolution requirements of our new blog (and modern blog audiences in general) dictated the images stay large for the blog post and header elements, but these dimensions were suddenly at odds with the minimum image size for posting on Twitter/Facebook/LinkedIn through HubSpot. 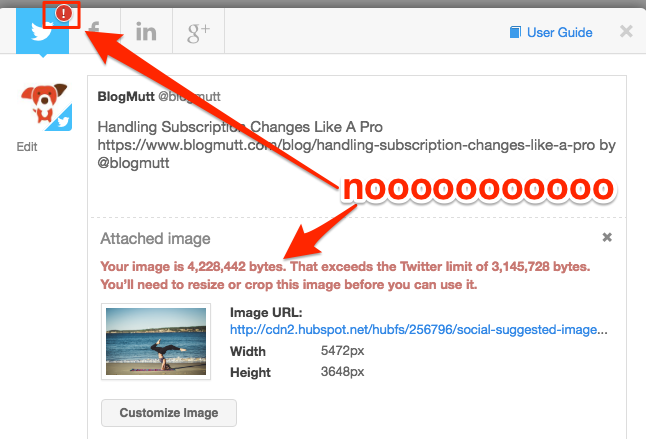 And thus presented the impetus to seek out other social media services. And holy moly, were there a lot of really good ones to choose from.

We turned to Buffer first. Why? They offered a free 1-month trial for businesses, killer case studies, and we’d long admired their content. That was enough ammo for us to give it a shot initially. (Though it does look like the 1-month trial has been cut back to 14 days since we left).

Right off the bat, we were beyond impressed by their onboarding emails/webinars/in-app tutorials, the optimal timing tool, and the Google Analytics campaign tracking.

Bottom line, it was one of the best onboarding experiences I’ve ever had.

(See stellar example of email below, complete with an encouraging gif from the Buffer team. #goals) 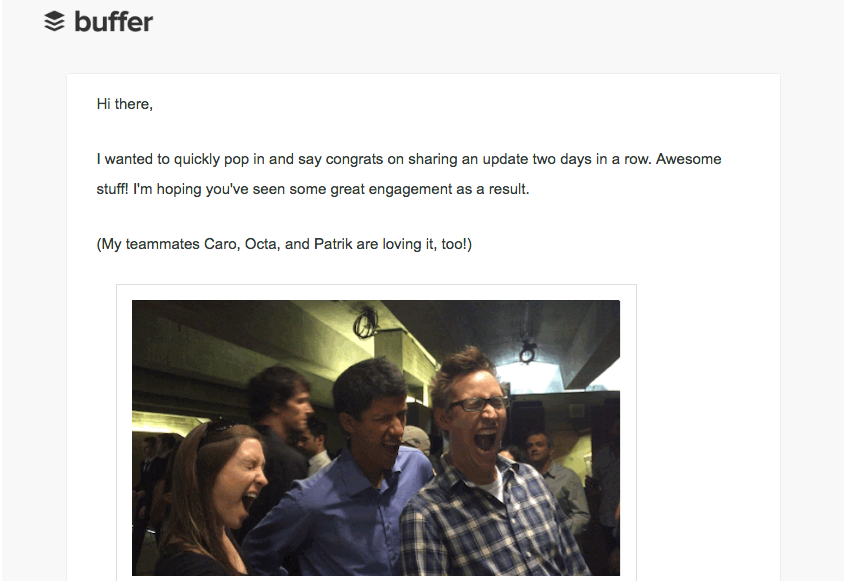 The optimal scheduling tool (only available above certain package offering/team size) is clutch, especially for us, a veteran company that isn’t new to the social game. It works by tapping into existing social data and extracts the times your audience engages most with your content. With this data, it optimizes the times to post and sets them as defaults.

For us, this was a real perk. We got actionable data out of the 2+ years we’ve been posting on social media AND valuable insights on our audience instantly. How could this be free?!

Without having to set anything up, Buffer loaded up a campaign into our Google Analytics account just for social and began tracking automatically.

Since Google Analytics is such a crucial gear in BlogMutt’s working marketing machine, this was essential to visually represent results of our efforts for the first time ever, which were largely positive.

We would later realize we’d taken this amazing feature for granted in the other solutions we pursued.

Unfortunately, as we neared the final days of our trial, the cons became pronounced when we thought about implementing Buffer in the long term.

1. Restrictions on Posting In Advance

Everyday, we schedule multiple posts dedicated to promoting the blog post published that day. Usually, for us, this consists of 3-5 different versions of the tweet/FB post. Then, we’ll schedule out each of those exact blurbs several days or weeks in advance, sprinkled on the calendar.

Buffer gave us an error when we tried to do this because they looked like duplicate posts, despite the shift in timeframe. This irked us and didn’t work with our process at all. After all, we’re only a two-person marketing team. We’ve got enough to do and time is tight.

You could see what was coming up to post on Twitter/Facebook/LinkedIn on individual tabs, but it was super tough to see what had already posted or what’s upcoming as a comprehensive look at all in one unified feed. This was a feature of HubSpot that we had appreciated, to make sure we filled the day appropriately across channels.

Additionally, it wasn’t easy to schedule a similar post across social channels. As any social media marketer can tell you, you’ll almost never post something exactly identical on LinkedIn vs. Facebook vs. Twitter (i.e. hashtags, preview link windows, images, etc). However, there are base similarities among the posts that we frequently used as starting points to get to publish faster—but Buffer forced us to create each anew and made editing similar posts difficult, which hindered our efficiency.

Since Twitter is the bread and butter of our social strategy, this didn’t fly with us. Something with the code from our blog conflicted with Buffer, so it warranted that we upload and save a new (often smaller) version of the featured blog image to Buffer before it could actually publish the social update.

Sounds small, but this was the real problem that catalyzed the process of switching to a second solution. We couldn’t stomach it.

So with that, we up and started with Sprout Social, another company that we’d long been familiar with, due to awesome Sprout Social content. (What can I say? This blogging company is a sucker for good content.)

What ultimately sold us on Sprout Social was the snazzy reporting, the streamlining of social messaging under one roof, a free 1-month trial, and a more integration-friendly platform.

Sprout Social reports were beautiful, easily pulled, and contained SO MANY of the metrics we needed to track. Can’t tell you how much we learned about our followers and every social action through these means.

These reports are formatted, perfect for those teams that need to show ROI on a super consistent basis but don’t have time to pull together reports, sliced and diced in oodles of ways. 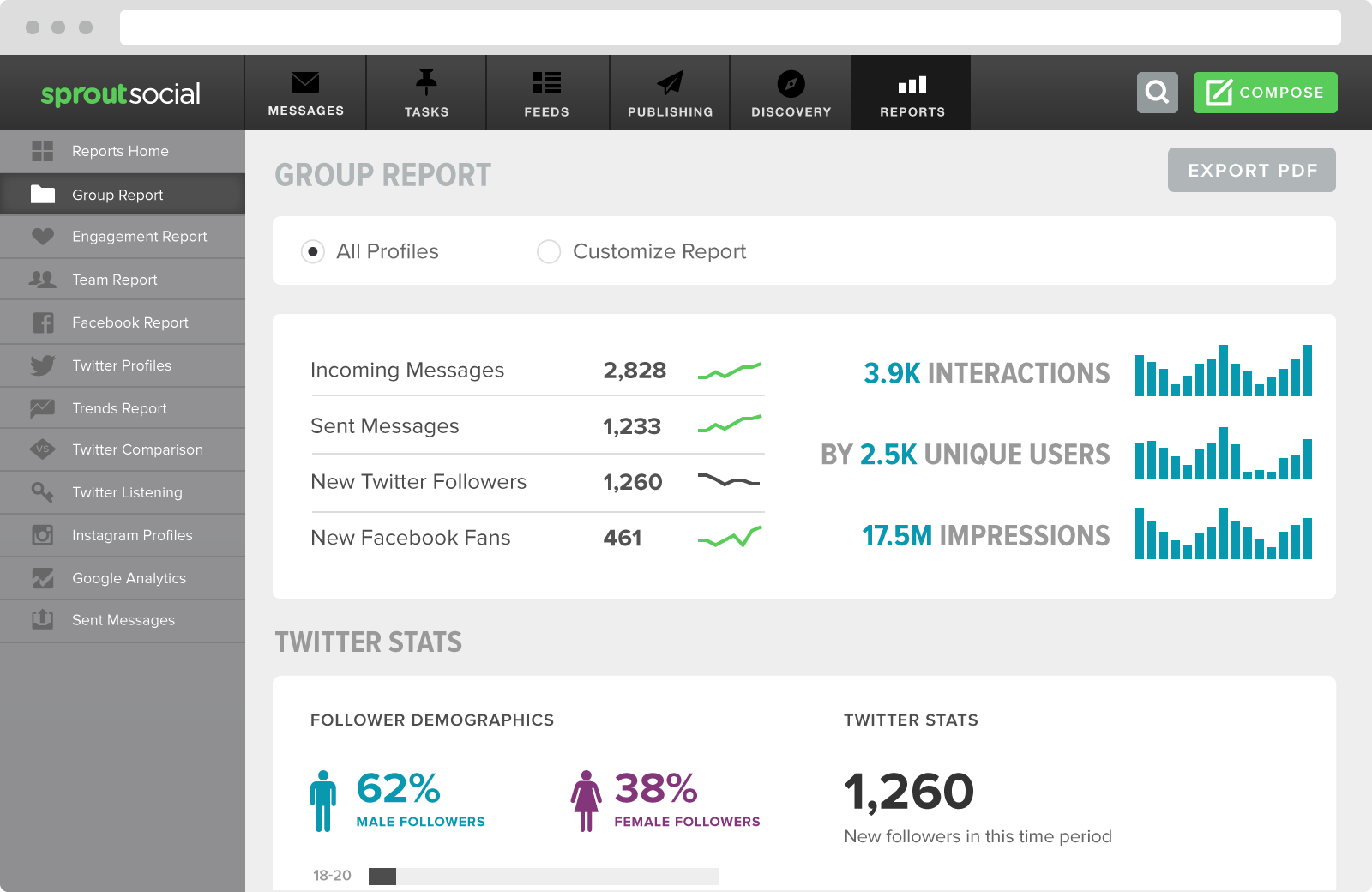 Any direct message, follower request, like, or comment, is handled within Sprout Social’s Smart Inbox. Suddenly, we had no need to keep tabs open all day for Twitter/Facebook/LinkedIn (hello, productivity!).

It functioned as the sole, social inbox. For us, it was super manageable, but for any other brands/companies that get even slightly more social engagement than we do, I could see this tool being ESSENTIAL to be efficient and prevent social media management from consuming every second.

Impressively, it also handled multiple users well. If you had several team members in the inbox all responding to social requests simultaneously, Sprout Social is almost absolutely your scalable solution. However, even so, we didn’t find this as a current must-have for us, a marketing team of two who trade off weeks managing social.

(Plus, every follower/retweeter was assigned a colored bar to signify how many followers he/she had. It was a definite nice-to-have to help prioritize follow-up.)

When we left Buffer, we were hungry for a more intuitive method when it came to publishing cross-channels.

Sprout Social’s drafting feature was the perfect answer to that, where we could alter each posting to suit the respective channel and audience without starting a new post constantly.

And while these perks certainly served as compelling arguments to stick with Sprout Social, it became clearer that Sprout Social was too big a solution for our team in ways, and lacked complexity in certain integrations which left us wanting.

1. Restrictions on Analytics in Google Analytics

Yes, we had reports. Oh, the reports! But you had to upgrade to the next level package (which we ended up doing) to integrate a Google Analytics account, which made our GA metrics viewable on Sprout Social.

This was the #1 the reason for the switch.

Le gasp! TOO many features? Yes, too many features. It ultimately felt too big for us, with too many unnecessary bells and whistles.

As I’ve mentioned, we are just a marketing team of two, and while the price wasn’t outrageous for our budget, the nagging thought at the back of our minds after switching to another solution—twice—was that a free social tool, HubSpot, got us closer to where we wanted to be, sans frills.

And that’s how we headed back to happily reunite with HubSpot’s social media scheduling after two months of experimentation.

Solution #3: HubSpot, We Back

Turns out we don’t need fancy scheduling tools or gussied-up interfaces. We knew the limitations of HubSpot and came back.

The best part was: They fixed our original beef! Prior to leaving, we communicated to HubSpot technical support that the errors in uploading large photo sizes needed addressing, so that may have helped usher in the super-easy photo editing tool at our disposal upon return.

In the tale of three social media services, HubSpot ended up being “just right” for BlogMutt.