Amantes Amentes, or, Lovers are Lunatics: a WOOF Round-Up

Here is your WOOF Round-Up, which comprises two weeks of fun words of the day, from a dictionary of the day.

Reverse them for emphasis. (e.g., “If you say that again, I will knock your block off!”)

Tuesday: Hips (1995 10,000 Dreams Interpreted: A Dictionary of Dreams) — to dream of fat hips on animals foretells ease and pleasure.

Wednesday: Neoplatonism (1994 Body, Mind, & Spirit: A Dictionary of New Age Ideas, People, Places, and Terms) — an amalgamation of Platonic philosophy and Eastern mysticism, developed in the third century. Held that all manifestations, physical and spiritual, emanated from a single transcendent godhead. Outlawed by Justinian I, though it had a significant influence on Christian theology.

Thursday: Buck (1985 Dictionary of American Regional English, Vol. I, A – C) — a crab in its molting stage.

Friday: ab imo pectore (1998 Dictionary of Latin Words and Phrases) — “from the bottom of the heart.” Cf. Virgil’s Aeneid, i.371: imoque trahens a pectore vocem / and dragging his voice from deep in his heart. 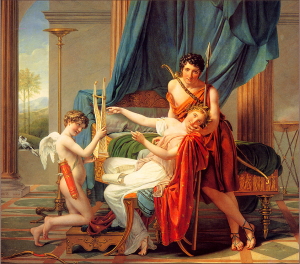 We hope you’re having a spectacular Valentine’s Day. But keep in mind what the ancient Roman playwright Terence said: amantes amentes (lovers are lunatics). So don’t have too much fun.

Of course, those ancient writers weren’t all so cynical about love. After all, the Romans even had a festival devoted to love and fertility, called the Lupercalia, after the Latin word lupus (wolf), which honored the wolf who nursed and raised the founders of Rome, Romulus and Remus.

At the Lupercalia, animals were sacrificially slaughtered by honorific priests (the Luperci), the young ladies were whipped to ensure fertility (not sure that would go over so well today), and in later centuries, everyone ran around naked. While the Lupercalia sounds titillating, it probably had nothing to do with Valentine’s Day as we celebrate it, other than that it was concerned with love to some extent, and it did happen over three days, which included February 14.

I’m fine leaving the ancient Romans with their wolfish celebration, and prefer to ruminate on love with the Greek poet Sappho, and her poem (all we have is a fragment) on jealousy, and how it feels to be in love (Fr. 31, trans. Gregory Nagy):

He appears to me, that one, equal to the gods,
the man who, facing you,
is seated and, up close, that sweet voice of yours
he listens to

And how you laugh your charming laugh. Why it
makes my heart flutter within my breast,
because the moment I look at you, right then, for me,
to make any sound at all won’t work any more.

My tongue has a breakdown and a delicate
— all of a sudden — fire rushes under my skin.
With my eyes I see not a thing, and there is a roar
that my ears make.

Sweat pours down me and a trembling
seizes all of me; paler than grass
am I, and a little short of death
do I appear to me.

This work was so stirring — even in antiquity — that the Roman poet Catullus masterfully rewrote it for his lover.

Have the loveliest weekend, and read some ancient love poetry to someone, or even yourself! Why not tart with a little Catullus, and finish with some Sappho?