WOOF Round-Up: Origin Of The Unicorn

Here is your WOOF round-up! And this week, it’s a double edition. So doubly enjoy the art, the knowledge, and the etymology. 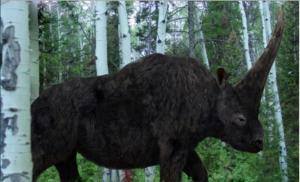 We learned that unicorns were important figures in medieval heraldry, but the origin of this mythological creature could be even older: 50,000 years ago, from ice age Asia. The giant Elasmotherium was related both to horses and rhinoceroses, and had a single large horn on its head (like rhinoceroses today, but with a bigger horn).

It’s certainly extinct now, like all the other mega-animals from the time, but it’s possible that human stories about the Elasmotherium might’ve been handed down and morphed into the medieval and modern ideas of the unicorn.

While you contemplate that, check out the other Words Of The Day:

Wednesday: Pygo — A root word that pertains to the buttocks. From the Greek πυγή, meaning buttocks, or tail. (1990 Mosby’s Medical Dictionary)

Thursday: To hit the rhinestone bracelet — To leave, to hit the road. (1972 The Queens’ Vernacular: A Gay Lexicon)

Monday (July 7): Unicorn — One of the most popular and ancient monsters in heraldry. It is usually drawn as a horse with a single long twisted horn, lion’s tail, and the legs and cloven hooves of a stag. (1996 An Heraldic Alphabet)

Wednesday: Tennis — In 1873, a British army officer introduced lawn tennis, which he called “Sphairistike” to the U.S. The game ultimately derives from a European game of the 13th century. (1995 Volvo Guide To Halls Of Fame)