Welcome to your weekly WOOF round-up, wherein we compile all of our words from the day, from the dictionaries of the day, into one handy compendium for your edification and pleasure. 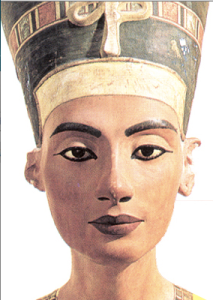 We learned a little bit about eye makeup in the Old Testament, and that it wasn’t looked upon favorably. In fact, we still use the term Jezebel, who is mentioned as having painted her face, as both a contemptuous appellation for a woman who is immoral, and as a friendly, jocular nickname for a woman who is not immoral, but who is pleasingly outrageous, only considered immoral by outdated standards.

Today, a person who would like to paint her eyes and brows can buy her cosmetics from Sephora. But where did ancient makeup come from?

Both ancient Egyptian men and women used kohl, a black compound made from a combination of materials, including lead, which was applied to the eyes with a stick (should I be looking forward to Sephora’s “Stick Application” line next season?). Both ancient Greek men and women used olive oil on their skin, and women mixed charcoal with olive oil for their eye makeup. They also used rouge and foundation.

But it wasn’t just the Old Testament writers who took umbrage with women in makeup. Xenophon’s Socrates, in the “Oeconomicus” (on household economics), argues against a wife who:

The woman’s husband has a chat with her, and in the end, Socrates, the husband, and the wife all agree that it’s deceitful for the woman to wear makeup (gee, another charge of deceit against a woman in the ancient world. Thanks, Eve!):

“You might successfully fool someone outside the household by this kind of deception, but insiders always get caught when they try to deceive one another. For they can be found out when they get up in the morning before they have time to prepare or they are caught out by sweat or put to the test by tears and exposed completely by washing.”

To sum up everything, Socrates concludes, “Women who sit around pretentiously ask to be categorized with the women who use make-up and deceit.”

While we have different standards for what is considered deceit in the modern world, are there any conventions you can think of that are similar today? Perhaps some criticize people who opt to have plastic surgery because it’s unnatural, in the same way that Socrates and the Old Testament brethren stodgily censured cosmetic makeup in the ancient world.

Wednesday: Laura — The name for a monastery where the monks live in separate hermitages around the church. From the Greek Λαύρα, meaning “passageway.” (1965 Maryknoll Catholic Dictionary)

Thursday: Eye paint — Black eye makeup which was applied to the lashes and brows to make the eye more pronounced and protect against the glare of the sun. In each of the Old Testament passages where it occurs, the person using it is to be censured (e.g., Judah, personified as a harlot, was seen wishing to appear beautiful to her lovers, and “enlarge” the “eyes with paint.”) (1987 Eerdmans Bible Dictionary)

Friday: Cicerone — A guide who explains the antiquities and chief features of a place. From the Latin orator, Cicero, whose eloquence the guides were thought to have had. (1935 Webster’s Daily Use Dictionary)