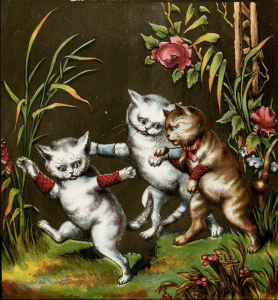 Contrary to the nursery rhyme, it looks like the three little kittens losing their mittens was a good thing!

Here is your weekly WOOF round-up. Every day of the week, we find a different dictionary from the BlogMutt dictionary collection, and choose a timely word from it! WOOF stands for WOrd of the day from the dictionary OF the day.

Monday: “Cats in mittens catch no mice” — Being overly-polite will not help one achieve her goals. (1993 Dictionary Of Proverbs And Their Origins)

Wednesday: St. Francis of Assisi — (1181 – 1226) Medieval saint, ascetic, and troubadour who eschewed his wealth, and loved god through all living creatures. (1967 Dictionary Of Christian Ethics)

Thursday: Lexicography — The art or practice of writing dictionaries. Though the term “lexicon” is often restricted only to mean a dictionary of Greek, Hebrew, Syriac, or Arabic. (1963 Usage And Abusage: A Guide To Good English)