WOOF Round-Up: “Show Me The Monet!” Impressionism And Literature 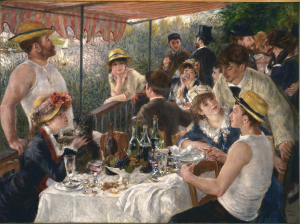 Renoir’s Luncheon of the Boating Party, 1880–1881, illustrates the Impressionist use of color and brush stroke.

Impressionist painting is a style of painting developed in the late 19th-century that creates the painter’s experience and impression of what she is seeing. As we know from Friday’s #WOOF, Claude Monet is the founder of this movement in painting, and was followed by other big-name French painters, like Renoir and Manet.

Why was Impressionism important? It was a transition from realism and academic painting, which were often painted in studios, indoors. Impressionism focused more on the painter’s interpretation of her subject, and tended to prefer subjects in the outdoors, using more colors, and less restrained brush strokes.

In what way did this movement in painting translate to literature? Impressionism gradually gained acceptance and popularity, especially in France, and the painters started to earn more money. Some French writers, notably Baudelaire and Proust, adopted the Impressionist approach of focusing on the writer’s experience and impression of an object, rather than the object’s realistic existence, before the writer’s rational intellect has had the opportunity to intervene. 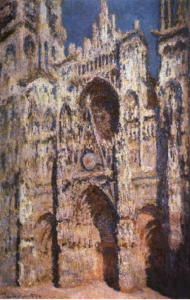 Monet’s Rouen Cathedral, 1894, paints the architecture of a cathedral in the same way that Proust describes architecture.

In Remembrance Of Things Past, take, for example, Proust’s Impressionistic description of the Saint-André-des-Champs cathedral:

“…carved faces of stone, naked and grey like trees in winter, were, like them, asleep only, storing up life and waiting to flower again in countless plebeian faces, reverend and cunning as the face of Théodore, and glowing with the ruddy brilliance of ripe apples.” (Proust, Remembrance Of Things Past: Swann’s Way)

Notice the way that the Proust focuses on his experience of the cathedral, rather than how it might exist to others. He creates the cathedral for the reader, using words, in the same way that Monet painted the Rouen Cathedral for viewers: using colorful, broad strokes, that come from experience, and not objective rationality.

Monday: Parkinson’s Law — The rule that the task expands to meet the time available for its completion (e.g., if you wait until the last minute, the task only takes a minute to complete). (1992 Webster’s New World Dictionary Of Computer Terms)

Tuesday: Steamer Day — The day before mail steamers sailed to the states from early San Francisco; occurring bi-monthly, Steamer Day was an important date on the calendar, when businessmen and all citizens readied things for the mail. (1994 Happy Trails: A Dictionary Of Western Expressions)

Wednesday: -Ivvy — Rhymes with chivvy (to tell someone to do something), divi-divi (a type of tree), divvy (to divide up), Livy (a Roman historian), privy (sharing in knowledge), tantivy (a rapid gallop or ride), and tivy (with great speed). (1991 The Complete Rhyming Dictionary)

Thursday: E Pluribus Unum — A Latin motto, meaning “one from many,” appearing on the obverse of the Great Seal of the United States and on many pieces of currency. The motto was suggested in 1776, though similar phrases are used in some earlier Greek and Latin texts (i.e., Heraclitus and St. Augustine). (1946 Dictionary Of American Politics)

Friday: Claude Monet, Impressionist — For all practical purposes, Monet was the founder of Impressionism. He painted what he saw. He didn’t set up his easel in front of Chartres and endeavor to paint a “cathedral.” No: Monet saw a shimmering plane of pale blue; jagged streaks of aqua shadow flecked with orange light. (1980 The Real Thing)