Here is your WOOF round-up: your single stop for all the Words Of The Day From The Dictionaries Of The Day. 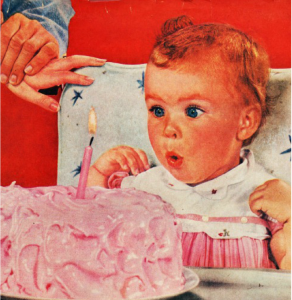 Somebody should be eating cake.

“Let them eat cake” has become more than just a historical phrase from the French Revolution. It can be used to convey detachment from reality, or even disregard for the plights of others. As we learned from Tuesday’s WOOF, perhaps we shouldn’t even be blaming Marie Antoinette for this long-running bon mot.

In 1769, the French philosopher Jean-Jacques Rousseau wrote a fanciful autobiography of his life, Confessions. In it, he includes many of his eyebrow-raising peccadillos, some of which only debatably happened. He definitely knew how to tell a good story. His penchant for storytelling, combined with his clear paranoia, makes his autobiography probably not very accurate. But it’s not wholly unreliable, either.

What does he have to say about Marie Antoinette? Nothing. In fact, he attributes the careless “let them eat cake” remark to an unnamed princess, but he writes this part of his Confessions several years before Marie Antoinette is supposed to have said it.

We don’t know who the unnamed princess is whom Rousseau mentions, but it’s likely that Marie Antoinette has been getting a bad rap erroneously these last few hundred years. Sure, Madame Déficit, as some have called her, was extravagant during a time when most of the French were poor and struggling, and she certainly opposed the revolution, but she probably wasn’t the villain that history has made her out to be with that careless remark.

In fact, Alt.Usage.English cites the possible origin of the phrase from an ancient Chinese emperor, who upon learning that his people did not have enough rice, asked “Why don’t they eat meat?”

We don’t know who this emperor was, or what happened to him, but we do know that Marie Antoinette met her grisly end at the guillotine, so let’s give her a break on the indelicate remark.

Monday: Five Commandments Of Revolution — In the 1980s, Welch articulated five bedrock beliefs: know the business engine (how to deploy resources to create value), understand the human connection, never compromise on performance, be candid, and never be an autocratic bully. (2002 Jack Welch Lexicon Of Leadership)

Tuesday: “Let them eat cake (Qu’ ils mangent de la brioche).” — This remark, supposedly made by Marie Antoinette, is an old chestnut. In his 1778 Confessions, French philosopher Rousseau mentions that the quote was the saying of a great princess, several years before Marie Antoinette is supposed to have said it. (1989 They Never Said It)

Wednesday: Iceni — A British tribe who accepted Roman rule soon after invasion. When their king died in 61 AD, and the Romans cruelly mistreated his widow and daughters, the tribe revolted and destroyed Colchester, London, and St. Albans. (1994 Wordsworth Dictionary Of British History)

Thursday: Garbage — “When I was a graduate student, I was told that the largest monument ever built by a New World civilization was the Temple Of The Sun, constructed in Mexico around the time of Christ and occupying 30 million cubic feet of space. Durham Road Landfill near San Francisco is two mounds…each mound is seventy million cubic feet in volume, a total of nearly five Sun Temples.” (1999 The World According To Al Gore)

Friday: Cry For The Moon — To want or ask for something that is impossible to get. She’s looking for someone to offer her a glamorous, well-paid and undemanding job, but I think she’s crying for the moon. (1993 Wordsworth Dictionary Of Idioms)