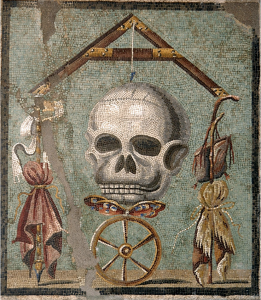 In this weekly WOOF compendium, you’ll find all of the words of the day from the dictionaries of the day. We also have some Halloween treats for you: spooky stats on the ancient Roman festival of spirits, the Lemuria, and an ancient ghost story.

The Lemuria, which isn’t technically Halloween related, was celebrated by the ancient Romans in May. It might’ve not have been a dark October holiday, but it was still pretty creepy.

The Romans believed that when a person died, she became a ghost, or shade. The Romans had a few different names for these ghosts, including Larvae, Lemures, and Manes. Generally, the differences among them are difficult to pinpoint, except that Larvae and Lemures tended to be more malevolent or needing appeasement, while Manes were generally venerated ancestors.

In 8 CE, the Roman poet Ovid wrote his Fasti, which was a long poem,as well as a kind of calendar. He says about the Lemuria at Fasti, 5.421:

There will be a sacred ancient ritual, the nocturnal Lemuria: they will give sacred offerings to the silent spirits.

During the Lemuria, dissatisfied and wandering spirits would come back to the places at which they had dwelled when they were alive. In order to ward off these inimical spirits, the living would rise at midnight, and either throw black beans over their shoulders with their faces averted, or spit out the black beans, bang some copper pots together, and chant verses nine times. 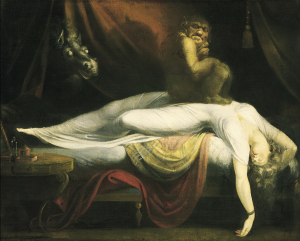 What was the point of the Lemuria? It’s probably not quite right to think of the ancient Roman Lemures in the same way that we think of modern malevolent ghosts. But perhaps the Lemuria serves the same purpose that the American Halloween serves, as a cathartic experience. We like to scare ourselves on this one day, with thoughts of the undead and the horror of death itself. In the end, we also like to tell ourselves that it’s actually make-believe, and that we are indeed still alive. For the Romans, perhaps the Lemuria was a way of recognizing the bitter truth about death, confronting it, and finally protecting themselves from it.

Even though it’s not Lemuria on this chilly October night, it might be a safe bet to throw some beans over your shoulder and bang those pots at the stroke of midnight, just in case you find your house haunted this Halloween. And if you’ll be telling scary stories in the dark, here’s a translation of a veritable ancient Roman ghost story, by Pliny the Younger, in his Letter 27.

Monday: Cthonian Gods — (from Cthon, Greek for Earth) The deities who rule under the earth or who are connected to the lower world, as Hades, Pluto, Persephone, Demeter, Dionysus, Hecate, and Hermes. (1995 Dictionary Of Classical Mythology, Religion, Literature, And Art)

Tuesday: School Dreams — To dream of attending school indicates distinction in literary work. If you dream of being at school in your youth, you sincerely long for the simple trusts and pleasures of days of yore. (1995 10,000 Dreams Interpreted)

Thursday: Athenaeum — A building or an apartment, where a library, periodicals, and newspapers are kept for public use, or a public reading room. (1989 Dictionary Of Americanisms, reprinted from the 1848 edition)