Welcome to the weekly #WOOF roundup, a compilation of this week’s words of the day, from the dictionaries of the day. 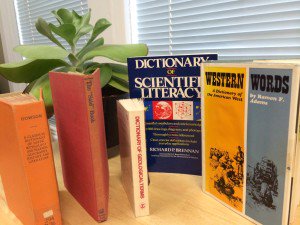 Started in 1864, Arbuckles’ Roasted Coffees dominated the American coffee market for decades, particularly in the Western states. Prior to the Civil War, all coffee beans were sold ‘green,’ and it was the customer’s responsibility to roast, grind, and brew his or her own cup of coffee. Roasting is a difficult process on a domestic scale, and many consumers burnt their beans, which ruined the flavor of the coffee. Brothers John and Charles Arbuckle were the first in the United States to sell roasted beans, which eliminated home-roasting, and their product was an instant success.

The Arbuckles were among the first marketers to have a collection scheme, where premium stamps clipped from coffee bags could be traded for various sundries such as handkerchiefs and razor blades. The brand even became a vocabulary term on the range– an ‘arbuckle’ was an epithet for a greenhorn rancher, a tongue-in-cheek suggestion that the ranch boss cashed in Arbuckles’ premium stamps to pay for the greenhorn’s services. Today, Arbuckles’ coffee has been replaced by Starbucks as the largest coffee roaster in the United States. Though named for the Pequod’s chief mate, the Starbucks brand sounds like a subtle tribute to the Arbuckle brothers, who originally roasted ‘The Coffee that Won The West.’

Monday: Guhyakas – Literally “hidden beings.” Inferior divinities thought to live in caves, and attend upon Kuvera, the lord of wealth, and his hidden treasures. From the 1903 Classical Dictionary Of Hindu Mythology And Religion, Geography, History, And Literature.

Tuesday: A tip for writers! How to convey nervousness (e.g., Woody Allen) without using the word ‘said.’ From The ‘Said’ Book of 1948 from Rodale Press. This is an interesting book made up entirely of alternate ways to write that a person said something.

Wednesday: Gangue – The nonmetalliferous or nonvaluable metalliferous minerals in the ore; veinstone or lode filling. The mineral associated with the ore in a vein. From the 1957 Dictionary of Geological Terms.

Thursday: Arbuckles’ – The brand of coffee so common on the range that most cowmen never knew there was any other kind. From: Western Words, A Dictionary of the American West, 1968.

Friday: Solar Wind – The stream of charged particles emitted by the sun as it constantly sheds a tiny fraction of its mass into interstellar space. From The Dictionary of Scientific Literacy, 1992.

Have a great weekend!