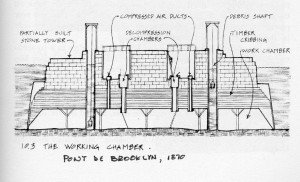 An illustration of a Brooklyn Bridge caisson.

Welcome to the #woof roundup, a compilation of our many words of the day from the dictionaries of the day.

From The Penguin Dictionary of Architecture, the word caisson is defined as an air chamber, driven down to the soil and filled with concrete (complete definition below). Caissons were first used in American marine construction in the late 1800s, and they gained fame during construction of the Brooklyn Bridge in New York City, and the Eads Bridge in St. Louis, Missouri. Both construction projects were undertaken on a massive scale. The caissons for the Brooklyn Bridge were so large that workers entered the caissons to dig down to the final foundation bedrock for the bridge pilings. The caissons were pumped full of pressurized air to keep water and other debris out of the work area. As men surfaced from their job site, some began to fall ill, and even died, due to the rapid decompression of air in their surroundings. They were suffering from decompression sickness, which became known as Caisson Disease. Today, Caisson Disease is commonly called the bends.

The architectural definition is only one of many for caisson. From The American Heritage Dictionary of the English Language, Third Edition, here’s the full definition:

Caisson – 1. A watertight structure within which construction work is carried on under water. 2. A device used to raise sunken objects, consisting of a hollow structure that is submerged, attached tightly to the object, and pumped free of water. 3. A large box open at the top and one side, designed to fit against the side of a ship and used to repair damaged hulls under water. 4. A floating structure used to close off the entrance to a dock or canal lock. 5.a. A horse-drawn vehicle, usually two-wheeled, used to carry artillery ammunition and coffins at military funerals. b. A large box used to hold ammunition.

Meaning #2 is used for sunken ship retrievals. Meaning #4 was recently put in place to help save Venice, Italy from crippling tidal floods. The image of meaning #5.a. was burned into recent American memory during the funeral of President John F. Kennedy. Meanings #5.a. and #5.b. were woven by Edmund Gruber into “The Caisson Song,” re-written by H.W. Arberg as “The Army Goes Rolling Along,” the official song of the U.S. Army.

What unites these engineering and military themes? Their original shapes. Caisson is a word descended from Latin, Old French, and French, meaning box, or large box.

Wishing you a great week!

Caisson – An air chamber, resembling a well, driven down to a firm foundation stratum in the soil and filled with concrete. Used for construction below water or on waterlogged ground. (1966 The Penguin Dictionary of Architecture)

Syntax – The study and rules of the relation of words to one another as expressions of ideas and as parts of the structures of sentences; the study and science of sentence construction. (1978 Dictionary of Linguistics)

The Alb – A floor-length white robe a priest wears during mass. From the Latin “tunica alba”.

Mugwump – A person who remains aloof from party politics. From an epithet used to describe independent Republicans in the 1884 US election.

Jubilus – The long melismatic vocalization of the Alleluias, sung to the final vowel ‘a.’ (1947 Harvard Dictionary of Music)

Jaunty – The adjective jaunty is said to be an anglicized, phonetic representation of the French word gentil, meaning an easy, sprightly manner. Used as a noun, jaunty, or jonty as it was sometimes spelled, means the master-at-arms aboard a British warship–the officer responsible for enforcing all rules and regulations, as well as for meting out punishment. The nautical jaunty is said to be a corruption of gendarme, the French word for “police officer.”

(1996 When a Loose Cannon Flogs a Dead Horse There’s The Devil To Pay, Seafaring Words in Everyday Speech)