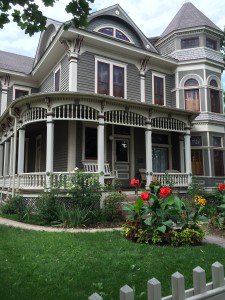 The Mork and Mindy house at 1619 Pine Street in Boulder, Colorado. Photo courtesy of Liz, who has always wanted a pair of rainbow suspenders.

Nanu Nanu! Welcome to the #woof roundup, a compilation of the words of the day from the dictionaries of the day.

Here in Boulder, Colorado, BlogMutt International Headquarters is situated only five blocks away from the famous ‘Mork and Mindy House’ located at 1619 Pine Street. Built in 1883, and remodeled in 1894, the Queen Anne-style house was originally the home of lumber magnate Ira McAllister. The home is officially known as The McAllister House, and is designated as a historical landmark. Many of the neighboring buildings are also significant to that period of history, including the residence of a former Boulder mayor.

The McAllister House got an international boost when its exterior was photographed and featured as the home of Mindy McConnell for Mork and Mindy. Though most of the show was filmed in LA, many shots were taken in Boulder, including one of Robin Williams rollerskating down the Pearl Street Mall. On the Mall, the New York Deli was a popular hangout for the cast and crew, and is now the home of Hapa Sushi. According to IMDB, the McAllister House became the most visited landmark in Boulder in 2004. Unfortunately, that designation intensified after Mr. Williams’s recent passing. Thousands flocked to Pine Street to pay their respects and leave tributes to the beloved alien from Ork. Today, all but a few of the tributes have been cleared, and the street is quiet. We sincerely hope that Mr. Williams has found peace, and that his humor will be remembered by generations.

Halal – The Quranic term for that which is lawful or allowed…in particular, it refers to the permitted categories of food and drink. (1996 The Muslim Almanac)

Nanu Nanu – A slang term which means “Hello” or “Hi” made famous by Robin Williams in the TV series Mork & Mindy back in the late 1970s and early 1980s. As in: “I am Mork from Ork, Nanu Nanu.” (www.urbandictionary.com)

Solidago – The botanical name for goldenrod. (1997 Taylor’s Dictionary for Gardeners)

Cerumen – Another word for earwax. (1986 Dictionary of Disgusting Facts)