What would your work week be without your hebdomadal (consider that one your bonus word of the day! From the Latin hebdomadalis, weekly, which comes from the Greek ἑπτά (hepta), seven) roundup of the words of the day from the dictionaries of the day? About 5 minutes from now, your personal lexicon will be about 7 or 8 words stronger! Here are all your daily WOOFs:

Monday: Pope Pius II (1458 – 1464) — b. 1405, possessed astonishing literary flair. Chose his name after Vergil’s “Pious Aeneas.” With Pius’ brilliant literary gifts and ideas, he stands out among the popes of his epoch. (1986 Oxford Dictionary of Popes)

Wednesday: Son of a Gun — (an expletive or term of affection); from the early 19th century when wives of Royal British Army Navy sailors were sometimes permitted to live onboard. The only cleared space for them to give birth was behind the cannons on the gun deck. (1996 When a Loose Cannon Flogs a Dead Horse There’s the Devil to Pay: Seafaring Words in Everyday Speech)

Friday: “The Country Wedding: a tragi-comi-pastoral-farcical opera” — by Essex Walker, 1729. (1889 Anonyms: A Dictionary of Revealed Authorship)

The subtitle of today’s WOOF sounds a bit like that famous made-up word from the film Mary Poppins: supercalifragilisticexpialidocious (did I spell that right?). Apparently, the 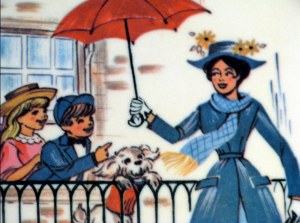 word does have meaning when you break it down to its individual parts. I won’t do all of it here, but we can pick out some pieces, like cali, from the Greek καλός (kalos), beautiful, and docious, from the Latin docere, to teach. So, in some sense, supercalifragilisticexpialidocious, is a “beautiful education.”

At first blush, it might seem ineffectual to parse the etymology of a made-up word from a children’s movie, but that’s exactly how words come to have real meaning and acceptance, and how entire languages are built, after all. Of course, the adjective in the subtitle of that opera, tragi-comi-pastoral-farcical, is supposed to be silly (shoving a whole lot of semi-words together to form one big obnoxious word), and so is supercalifragilisticexpialidocious. They’re comical, but there is real meaning behind them.

So what differentiates these funny words, which we wouldn’t dare try to use in a scrabble game, from what we might consider “real” words? Most would say that a word is socially recognized when a lot of people use it — which is why dictionaries aren’t static things. They are more like snapshots of a culture’s language usage. Anyone remember a few years ago when the Oxford American Dictionary accepted Rachel Ray’s EVOO into their latest dictionary? It stands for Extra Virgin Olive Oil, in case you were wondering. Holy ravioli! Who knew that EVOO was a real word, like plenipotentiary, only without much of a historical etymological history?

What do you think of word usage — what do you do? Do you think people should remain staunch in their use of “real” words, and slow to accept slang into their vocabularies? Or do you think language should be flexible and permitting of new words to grow?