Zenefits Vs. ADP: Does Anyone Win Here?

(Editor’s Note: I was in the middle of writing a long post, the Conventional Wisdom about Zenefits, when we found out about what’s become an epic feud between Zenefits and ADP. This is our take.)

If you are a user of Zenefits and/or ADP, you’ve probably seen evidence of a very public dispute.

In short, ADP cut off Zenefits. This means that small businesses (like BlogMutt) need to jump through a bunch of extra hoops to get Zenefits working with our payroll processor.

It’s easy to think of this as a David Vs. Goliath story, as has been done. But that doesn’t quite work because in this case the ADP Goliath is basically winning, having clubbed Zenefits David pretty good and David hasn’t been able to hit anything with all the rocks it is throwing.

The Zenefits CEO himself tried to make ADP into a Dirty Harry. He probably shouldn’t do that. While Clint Eastwood’s character was indeed dirty, he was also effective and only killed “punks.”

I think the most fair (if weird) analogy is that Zenefits is the lovable but accident prone Paddington Bear, while ADP is the honest “belt and suspenders” Bruce Baldwin from the classic “His Girl Friday.”

For those of you who somehow have never seen His Girl Friday, Baldwin is engaged to the Rosalind Russel character, Hildy Johnson. Hildy picked him because he’s everything her ex-husband, played by Cary Grant, is not. He’s reliable, secure, earnest. And in the movies, he doesn’t stand a chance. Grant’s character Walter Burns mocks him not only for wearing a belt and suspenders, but for carrying an umbrella and wearing an overcoat and golashes because of a slight chance of rain.

That’s ADP. In the movies, ADP will never get the girl, but real life is not like the movies and I feel much better trusting my payroll to Bruce Baldwin than to Walter Burns. 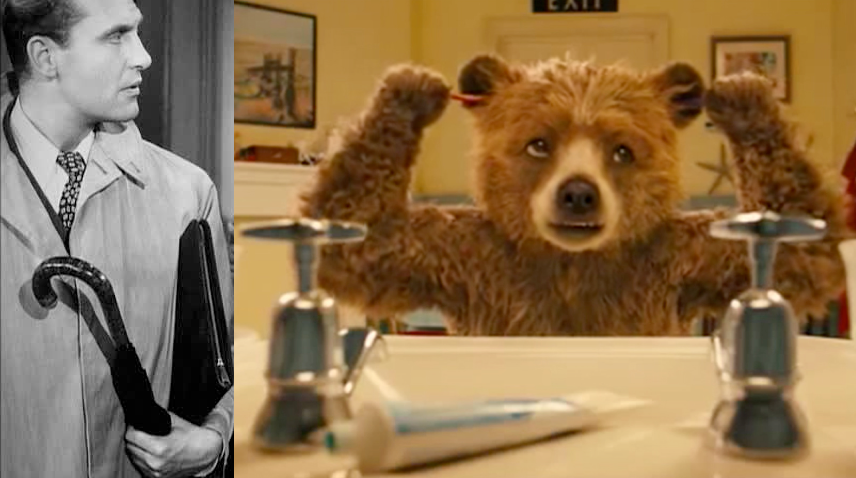 Zenefits, meanwhile, is Paddington Bear. Everyone loves a cute bear. The Venture Capital community couldn’t wait to unload piles of money on them. The tech press fawns over Zenefits the way little girls fawn over stuffed animals.

And when the bear uses toothbrushes to clean out his ears, all the elite of Silicon Valley can do is giggle and guffaw.

In the movie and in the books, Paddington Bear wins our hearts every time. And if Hollywood was writing this drama, things would certainly come out differently.

But this is not Hollywood, it’s the software vendors that take care of our employees, and from the perspective of a small business that wants these two vendors to just work, both sides need to just get over themselves.

We heard about this first from Zenefits. Even “edgy” startups were probably shocked at the tone in the note from Zenefits, which tried to paint Zenefits as the victim of a corporate bully: Zenefits had been cut off at the knees by an entrenched player.

Here’s part of that letter:

ADP systematically deactivated these accounts — accounts that you set up, in your payroll system, to allow Zenefits to work on your behalf. The reason for this is that ADP believes it can one day build software to compete with Zenefits, and in the meantime they would like to do anything they can to impede Zenefits.

Could that be true? We had a debate about that in the office, some wanting to believe the Machiavelian instincts of the older and larger ADP crushing any enemies, even if they are only potential enemies. Others in our office argued that APD may have had some actual security concerns. Given the number of security goof-ups that we’ve seen from Zenefits (see our post), it’s certainly possible that they goofed up some aspects of how they interacted with ADP.

When ADP responded, it confirmed that the second theory was probably correct. I really think ADP barely even knew about Zenefits until someone in IT noticed that 25 percent of all the third-party traffic they were getting was coming from Zenefits when Zenefits clients were less than one quarter of one percent of ADP clients.

ADP has been around a long time, and has worked with a bunch of third parties, and has probably cut off a bunch of them over the years. When it happened in the past, the cut-off vendors probably just retreated with tails between legs.

Not Zenefits, the darling of Silicon Valley.

I can imagine the Zenefits management created a “war room” and loaded it with Red Bull and exhausted executives who came up with a strategy to fight back. They can’t do this to us! TechCrunch said we were the king. They can’t screw with the king.

Maybe they didn’t have that much hubris, but it wouldn’t be surprising if they did.

So, filled with bravado, they wrote that email accusing ADP of subterfuge. There’s an old saying in business that you should never believe your own press releases. Zenefits clearly went all-in with belief in the theory that they were being sabotaged, so much so that they started a change.org petition. That’s right, they thought their beef with ADP had the same moral weight as, for example, petitioning congress to approve a new drug to save lives.

And if they thought their customers would rise up like an army to defend Zenefits, well… the number of change.org petition signers at this point seems to be awfully close to the number of Zenefits employees and investors, and maybe a few family members. I’m guessing that a lot of Zenefits users are like us, with no need to jump in between two large, well funded companies in any kind of battle.

Look, I’m a big startup fan. I boost startups on a local TV station. I mentor unofficially all the time and officially for groups such as TechStars. I want Zenefits-style companies to do well and make the world better.

But it appears (to use an old Colorado skiing expression) that Zenefits has gotten out over its tips. Zenefits has a great business model, but hasn’t been able to live up to its promises. No matter the fault, the relationship between Zenefits and ADP is now wrecked. Trying to manufacture a kerfuffle may have seemed like a good idea to Zenefits, but all it did from my perspective as a user was make the Zenefits team seem petulant and more concerned with posturing than solving the problems. And if they lose that defamation lawsuit, it will seem even more unwise to make such fantastic claims.

Just as before this all came up, we’ll still be using the Zenefits software for the time being because I don’t really have time to make a switch, but we are anything but loyal.