I just got back from this year’s Bolo Conference and it was a blast. A big thank you to John Hall and his team at Influence & Co. for introducing us to this wonderful event. I’ve worked in ad agencies for nine years and had never heard of this conference.

If you’re an agency person looking for new ideas and to mingle with legitimate thought leaders in advertising, you’d be hard-pressed to find a better conference. Also, it’s small (couple hundred folks). So there’s plenty of opportunity to create actual relationships with attendees. We were there because BlogMutt is an awesome partner to agencies.

And perhaps that’s why I came away with the realization that these conferences and tradeshows are essentially like adult summer camp. 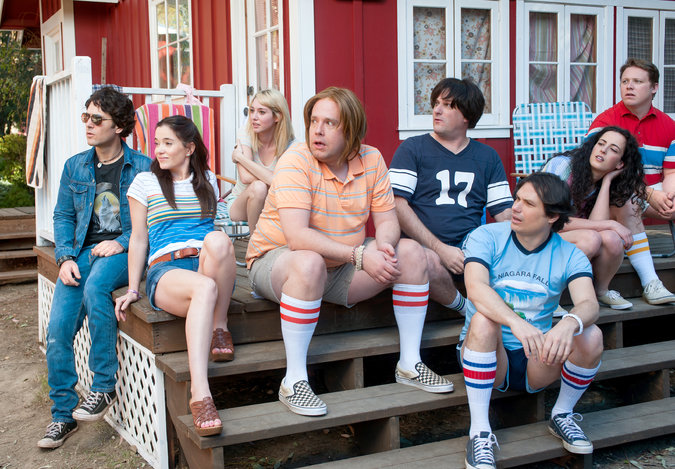 Reason #1: Like camp, the first day of the conference is always awkward

I can’t be the only one that gets nervous on my first day at a conference—especially traveling alone (like I did this year). There are cliques of business people who’ve attended this thing for years and know each other so well. They’re sharing inside jokes. Reminiscing about last conference (and that time Bill lost his rental keys in the champagne room).

And then there’s me. It’s my first time. And like anyone’s “first time” it can be awkward. You don’t know what goes where, it’s hazy, and the next thing you know it’s over.

Reason #2: Like camp, there’s nothing worse than eating alone

Nothing sadder than a conference-goer eating lunch alone. Some people need that alone time. I get it. You’re making small talk all day. And small talk is EXHAUSTING! Sometimes you just need a minute to recharge your batteries.

But seriously, nothing’s sadder than someone eating alone. We’ve all done it.

There’s that moment of truth during conference breaks where you look to find a table of people with welcoming faces that you can join. Everyone seems to be engaging in the most interesting conversations (when in reality it’s a lot of geographical small-talk. “Where you from?” “Oh, I’ve been there.” “Love the weather.” “You got kids?” that kind of stuff).

Putting yourself out there, even at a conference lunch, is no different than the first day of school and you’re going to the cafeteria. And there’s TONS of pressure when picking the people to eat with. If you eat with these people on day one, you might be inextricably linked to this group forever.

Reason #3: Like camp, every conference has the “party” guy

Every conference has got “networking/party guy”. Essentially, Deanzie from the utterly underrated movie “Cedar Rapids.” Ok, that clip has tons of blue language and I wouldn’t advise watching it on company time nor is BlogMutt condoning that kind of conference behavior in any capacity.

Cool guy has been to enough conferences to know the ins and outs of business travel. It’s just like the camper who knows what counselors are cool or where the hidden pack of Lucky Strikes is. He’s the one pushing another drink on you, making plans for later that evening and it isn’t even noon yet, giving conference-goers nicknames like “boss” and “ace” and saying “I gotta introduce you to this guy!”

Reason #4: Like camp, people lose their ever-loving minds when they’re away from home

Adults go bonkers at conferences. Bottomless expense accounts, open bars, co-mingling with other adults away from their spouse and kids. It’s a recipe for madness. And it’s no different than the kids who get to go to camp, far away from their parents, and stay out late, eat bad food, and engage in mindless shenanigans.

Sure there’s some work done, but mostly, it’s an excuse to get out of the office and away from your family so that you can enjoy the rights and privileges of being an adult.

You could’ve gone out late, crashed your rental car, slept outside, and showed up in the same suit and tie as the previous day…but your boss (or parents) don’t have to know about it. For all they know, you had a pleasant time and made some new friends. What happens at conferences, stays at conferences. Except, of course, all the networking and business opportunities you created.

Sure those first days are awkward. But by the end of the week, you’ve met a bunch of cool people and had a blast. Until you start to sense that impending feeling of dread. The knowledge that you’re going to have to go back to work. Emails have started piling up. Deadlines are approaching. Your boss is calling. Your wife is calling. The kids are calling. The days of running around and having fun are over. It’s time to head home.

Ok. I don’t mean “girl” in the literal sense. For conferences, the “girl” is a metaphor for that big business deal you anticipate closing. Man, you were SURE she was the one for you! You had such promise while at the conference. She laughed at your jokes and seemed genuinely intersted. You were sure that this was going to be a BIG business opportunity for your company. But over time, you lose touch with her. She gets busy. Emails go unreturned. The promise of this new relationship sputters out.

But that’s the beauty of conferences. The thrill of the chase. The unknown. Meeting new people. And a few days out of the office in a different city.

That’s all I got. That’s one more conference on the pile. And it’s another reminder, that yes, conferences are essentially summer camp for adults.