Naturally, we are convinced that blogging is a solid way to build traffic, increase leads, and further the conversion process of turning prospects into customers. That’s what we do.

But we are small, and we know the tech and advertising world is more likely to listen to Apple than to us. And with the release of iOS 9, it appears that Apple has something to say about adtech, privacy, how search will work, and how consumers and companies will interact on the web going forward.

The bottom line? If you weren’t convinced that blogging beats adtech before, Apple’s iOS 9 will probably convince you.

Cookies and retargeting technologies are great for advertising agencies and ad buyers — they essentially latch onto interested shoppers and narrow the range of choices they’re exposed to until, boom, it’s time to buy. Also, it’s great for businesses that advertise, being a relatively inexpensive way to use targeted advertising to shorten sales cycles.

It’s not always so great for consumers, though. Besides the fact that targeted (and retargeted) ads and pop-ups are annoying, there are some very clear privacy concerns related to a number of adtech devices in use. Some have called it a system of “commercial surveillance.”

That’s why there’s been so much attention from reputable industry watchers like Doc Searls, the Wall St. Journal, and others. If the most popular mobile operating system suddenly becomes out of reach for a raft of advertising technology players, the landscape could change dramatically.

Especially when the word gets out that pages load as much as four times faster and use half the data if advertising technology is blocked. 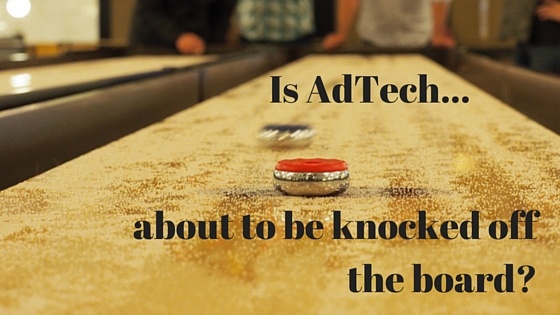 While Apple’s new built-in search feature, Spotlight, has plenty of allure for developers, it’s being touted to consumers as the search for the privacy conscious. Also likely to speed Spotlight’s adoption: the search feature is built into the phone, making it the default choice for iPhone users.

By making a new operating system vastly more useful to both developers and users, Apple is almost certain to have a distinct advantage in iOS 9 over competing mobile operating systems.

It won’t end Google searches (and ads) as we know them, but it will alter the playing field significantly.

So What’s the Future Hold? What Will Adtech Do?

Spotlight will be well-received. Google will adapt. Adtech will adapt. But as consumers grow accustomed to Spotlight – shipping since mid-summer on all new iPhones and iPads – they’re likely to remember how much they enjoy being able to research purchases without being harangued by targeted ads. They may remember what it’s like to make their own decisions as they shop online.

One possible change in search algorithms that seems likely: a continued shift toward natural language searches. As with the major changes in search brought about by Penguin, Panda, Hummingbird, and Pigeon, in spite of Google’s obvious revenue gains from Adtech sales, the search giant knows what people want: search results in context.

And that’s why blogging beats adtech.

Blogging: A Conversation, Not an Ad

Blogs are like news articles – with a twist. Consumers are savvy enough to know a blog about coffee, posted on a coffee roaster’s website, is probably designed to sell coffee. But, a post about coffee, written in an engaging manner, with some actual value for the reader, is not an ad.

It’s part of the conversation about the product. And the reader came to read it because he was interested in coffee. That’s how blogs work – by being involved in the conversation as the consumer considers his purchase.

Adtech has its place, and probably always will. But Apple’s latest iOS suggests that place may be shrinking.

In the meantime, the spotlight is on content — and blogging’s role may have just gotten a lot more important.

Editor’s Note: I came across the post from Doc Searls and wanted to write a post about how these changes to the Applie mobile opperating system will affect the world of blogs for small business. But I also wanted to take the weekend off. So, I just posted a link to that post, and a request for a post, and when I came in Monday the post was all done by the writer. I was happy to give her a byline for this piece, even though I did edit it some. (We give bylines here on the BlogMutt blog, but our customers typically just say that they wrote the post themselves, which is all part of the deal.) I’ve always shied away from the Adtech world because of just this sort of threat. Blogging, however, is all but immune from technology changes. No one, single change from a device manufacturer can take away an ability for a business to let the world know what it’s about with good writing. That’s what BlogMutt is all about. — Scott Yates

Wanna talk it over?

Our director of marketing, Patrick Armitage, will help answer questions about your blog strategy and ways to become a more strategic inbound marketer with BlogMutt — completely free.