In the olden days of Madison Avenue, copywriters collaborated with ad agency experts, artists, and jingle writers. The copywriter wrote the captions, described the visuals, and made sure there was no dead air during those 30-second, expensive commercials or in the printed ads. 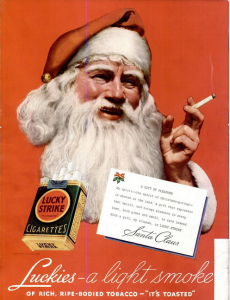 In an April 1953 Chesterfield Cigarettes magazine ad, one copywriter penned this gem:

“A medical specialist is making regular bi-monthly examinations of a group of people from various walks of life. 45 percent of this group have smoked Chesterfield for an average of over ten years…[Medical specialists reported] no adverse effects on the nose, throat and sinuses of the group smoking Chesterfield.”

The job of a copywriter has always been to tell a story and craft it in a way that somehow resonates with the target audience and produces an emotional response. Whoever wrote the above copy obviously wanted to lull smokers into a benign sense of security.

In fairness to those copywriters, they were just doing what the ad executives demanded, who, in turn, had to please the big tobacco executives. The adage of “run it up the flagpole and see if anyone salutes” was undoubtedly at work here.

Daredevil smokers of unfiltered Lucky Strikes definitely saluted one ad that claimed “20,679 physicians say ‘Luckies are less irritating.’” (Which begs the question, less irritating than what?)

Nowadays, advertising and media copywriters are busy at other enterprises that don’t involve hyping fake science and employing actors who say, “I’m not a doctor, but I play one in a cigarette commercial.”

In fact, the Internet has promoted an explosion of copywriting opportunities in web content, ads, marketing emails, social media, and, yes, blogging. In fact, blogging is a subtle form of advertising in that it adds value to a web site, and if successful, elicits a positive response from the reader.

The reader finds the blog as a result of great copywriting, which, in turn, attracts the web crawler. The crawler brokered the deal, and the blog serves somewhat of a free sample of the wares and services of the person who hires the skilled copywriter.

The copywriters of the 50s and 60s, puffing away in the smoke-filled Madison Avenue skyscrapers were a product of their times, when smoking was Bette Davis glamorous. Doctors who shilled for tobacco companies added credence to deceptive advertising, and copywriters creatively paraphrased so-called medical evidence.

Today we know better, but web copywriters are also of the mercenary ilk. Somewhat like the ancient scribes at medieval town fairs, today’s bloggers can write without expertly knowing their subject matter, but can do a credible job getting the message out.

Editor’s note: Curt Smothers is an ex-smoker, who grew up during the heyday of cigarette advertising. If you’re looking for great blogs at a reasonable price from excellent writers, contact us. We have more like Curt.

This blog is an example of the kind of writing you can get for your blog. The only thing that’s different is that it has the name of the writer. For your blog, you can say you wrote it. That’s fine with us. We’re happy mutts. Click here for more explanation of this series of posts. — Scott