Interstellar was one of the biggest films of 2014. Directed by Christopher Nolan, who also did the Dark Knight trilogy and Inception, Interstellar is a strangely moving science fiction epic. One doesn’t usually associate emotion with fantasy or science fiction but Interstellar manages to remain scientifically complex and emotionally gripping at the same time. Warning: spoilers ahead!
A Blight Upon the Earth

The movie stars Matthew McConaughey, Anne Hathaway and Jessica Chastain. It is set in a world where the human race is slowly beginning to disintegrate because of a blight upon the earth. People can’t grow food anymore and the air is running out of oxygen. So it’s necessary to find a new place to live—a new planet which has the same conditions that earth used to have to support life. 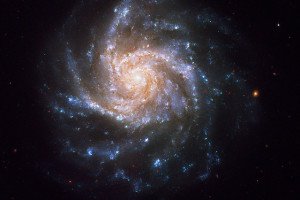 McConaughey, Hathaway and a couple of other astronauts set out to find a planet like this, for which McConaughey has to leave his family behind, especially his young daughter who doesn’t want him to go. They explore three planets that seem like possibilities. At the first one, they have to get really close to a black hole; as a result, time passes a lot faster than they anticipate. They’re only at the planet for an hour or so but 25 earth years have passed during that time.

When McConaughey gets back to the ship, he finds a number of messages waiting for him from his son who has been growing up in his absence. He finds that he’s missed all the milestones in his children’s lives. Plus, his father-in-law has passed away. His daughter refuses to write to him until the very end, when she discovers that his mission to find a new earth won’t actually save the human beings who are still living here. McConaughey can’t help crying when he listens to the messages waiting for him.

Information and the Human Connection

We can learn a lot about blogging for small business from these messages. On the face of it, the messages aren’t telling McConaughey anything very important; they’re just detailing the daily lives of people who live on earth. However, given that McConaughey is in outer space, he doesn’t have access to this information and he needs the messages to give them to him. Not only is he learning what’s going on with his children and on the earth, he’s also making a human connection which is missing in space.

Providing Information via the Internet

Similarly, with the internet, people keep posting new information every day, as news, how-to articles and blog posts. When you’re posting these pieces, you may not think that they seem very valuable but you can be sure that there’s someone somewhere on the earth with an internet connection who finds them indispensable.

The Blog as a Timeline

A blog can be like a timeline. Looking back at it, you can see everything that your company has achieved. Although those achievements look small when they’re occurring, they look much bigger when you go over them after a period of time.

In fact, now that a new year has begun, you might want to go over your blog from last year to see how much you have progressed. You’ve probably covered a number of topics related to your field. You might have reported some news occurrences in your field too. And although most of your blog posts might seem ordinary, there have probably been some that you feel especially proud of.

Contact us for well-written blog posts. They may not be interstellar but they will at least cross state lines and possibly become international as well!