New Stats Show Why Social Media Marketing Is Important to You

The always spot-on team over at HubSpot recently compiled an amazing list of new social media statistics that we found fascinating. 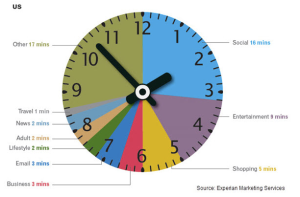 For instance, one stat from Experian, social networking sites now account for 27 percent of the total time spent on the Internet in the U.S. Further, HubSpot reports that social media marketing produces almost double the leads of trade shows, telemarketing, direct mail or PPC. Gone are the days when the newspaper and the phone book were your best tools for marketing. Facebook and Twitter are your new best friends.

America’s top companies have already discovered that social media sells. Socialbakers statistics show that Walmart, with the leading company Facebook page for the U.S., has increased its social media fan base by more than 720,000 people in a month. It adds more than 17,000 new followers every day. And every time a new follower likes the Walmart page, a link to it appears on a timeline for all of that follower’s friends to see. The same thing happens when someone shares a Walmart post or comments on one. It’s like a massive advertisement going out on the internet thousands of times a day.

Syncapse reports that 85 percent of fans on Facebook recommend brands to others. Even if your business has only a fraction of the fan following of Walmart, every one of those fans is valuable, not only for the business they do with you, but also the business they bring to you. And it isn’t just Facebook that can bring the customers through your door. Samsung Mobile, currently at the top of the list for fastest growing Twitter profiles, has seen more than 18,000 new followers in a single day. HubSpot reported that 36 percent of all marketers have found a new customer through Twitter in 2013 and that customers with over 1,000 Twitter follwers generate more than 800 new visitors to their website each month.

The Internet poses many different and powerful tools for marketing a business. While we’ve mentioned some of the biggest businesses around, don’t discount the power of social media for small business. Having a social media presence helps you connect with potential customers and blogging gives you the chance to share knowledge with them. With just those two sources of marketing combined — an active profile and an informative blog — you have the power to put your business out there for thousands of people each and every day.

Editor’s Note: I thought this was a great post because of all the new stuff. I had no idea that social media is now making up such a huge chunk of online time, even though I run a service that helps businesses with the bedrock of social media: blogs. If it’s been more than a week since you’ve blogged, you need BlogMutt! (For an explanation of this series of posts, click here.) — Scott